Moving to Cannes properly for the rest of the festival and a train strike meant the day started late for us. But it was a day of excellent cinema, glamour and sunny weather. I could get used to this. We settled for a film based on the beautiful title alone (Post Tenebras Lux) and a later South Korean one called Dangerous Liaisons, because I will watch any film that is adapted from Dangerous Liaisons (Yes, even Cruel Intentions) and any South Korean film (aka the best cinema in the world).

So a 4pm screening in the Grand Palais for Post Tenebras Lux meant we posted ourselves near the steps by 2pm with our little sign begging for an invitation for the Carlos Reygadas' film, along with other film fans hoping to get their cinephile fix. And Lady Luck was on our side yet again as we scored an invitation within minutes. In fact, I was even handed over an invitation for the gala screening of the same film at 10pm, but with no tuxedos to wear, I had to decline! Note to self and anybody thinking about making the trip next year, pack a tuxedo! It might have been a slow, experimental film but the audience was still fighting to get in, yes, fighting. Only in Cannes!


I had obviously heard of Carlos Reygadas before, with his reputation for crafting some slow and contemplative films (right down my street!), but had not seen any of them. I just wanted to see his new film Post Tenebras Lux based on the promises made by its beautiful title alone, and a few lovely stills seen there and then online. And as mentioned before, Cannes is so precious in the sense that it is one of those rare places where you can see a film without knowing anything about them! 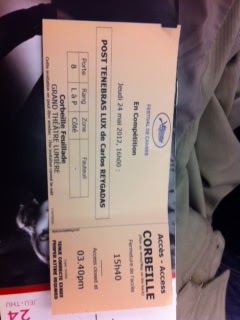 It was just before the film started that I saw an awful lot of tweets about the Eurovision, which made me realise I just did not want to go back in the real world ever again.

And the film started. The first ten minutes, set in a field as a thunderstorm is raging, and as a child is wandering about surrounded by animals, is probably one of the most beautiful scene I have seen all year. It looked like what The Tree Of Life tried (and failed) to achieve in two hours, with the sort of heavenly cinematography whose use of the light during the witching hour cast a real spell.

And in fact, the comparisons with The Tree Of Life became quite apparent (well for me anyway), even though Post Tenebras Lux can actually be seen as its polar opposite, its dark alter-ego. While the Terrence Malick film celebrated family life and the beauty of nature and faith against adversity, in here family life is shown as a struggle under the cracks and pressures of violent and sexual impulses, and a turbulent human nature.

In The Tree Of Life, we had an angelic Jessica Chastain levitating and the Big Bang. In Post Tenebras Lux we have a red devil with a big penis and a gang-bang. After the intriguing opening scene (and the red devil), the film turned out to be slightly less experimental than I first expected (although the whole thing is filmed through a weird filter), with the story of a Mexican family with young children and its trials being fairly straight-forward, yet still eminently compelling.

The Mexican director finds the right balance depicting almost mundane scenes of family life as well as darker scenes of random violence, and a flashback in a swingers club that would not have been out of place in a Gaspar Noe's film.

As it often happens in Cannes, a lot of the audience left throughout the film. In fact, a woman asked if she could have my aisle seat as she was planning on an early exit! And after a particularly baffling (but intriguing) few last scenes, the end credits were met with much booing and jeering, at which case I felt like standing up and tell them all to be quiet.

Personally, I would be not be surprised if the film wins the supporting prize after the Palme d'Or, the Grand Jury Prize, reserved to more experimental films.


After this shock, we then tried our luck at the Director's Fortnight, which we had zero success getting in so far, and joined the queue to see Dangerous liaisons, a new version by South Korean director Hur Jin-Ho but set in Shanghai in the 30's and in Mandarin. Spending an hour in the queue chatting with a delightful woman who was on her last festival she said (her 30th!), we managed to get in!

Now adapting such a well known book is actually more of a challenge, with the story being so overly familiar, and with a definitive version having already been made by Stephen Frears in 1988, with Glenn Close and John Malkovitch. I was concerned that this new one would just be a pretty but not particularly original adaptation. Besides, there had already been a South Korean adaptation a few years ago called Untold Scandal, which I found rather dull. But I need not have worried. The sets and costumes are exquisite indeed but never overpowers the action, and it is the strength of the original material that the story works beautifully in a different time and setting.

The film actually seemed more of a remake of the Frears version than an adaptation of the book, with several scenes being directly lifted from it but it was still its own film indeed, with a few minor changes near the end, which makes the story slightly less dramatic but all the more darker, with an added touch of melancholy. And while the cast is uniformly good, Cecilia Cheung, in the Madame de Merteuil character, is the real highlight, bringing beauty and depth which more than do justice to this fantastic character, with the added bonus of the most fantastically evil chuckle to ever grace the big screen.

I particularly liked the way in here she is not just presented as a rich widow with little to do with her time but to be wicked, but rather as a sharp businesswoman who uses her wits to get ahead in a male dominated society, which adds a layer of sympathy towards her character. And as the icing on the cake, Cecilia Cheung was attending the screening, looking even more ravishing in person than in the film. Apologies for the picture which makes her look rather spectral, next year, on top of packing my tuxedo, I must not forget my camera, the i-phone having clearly shown its limitations.

And that was it for the night, as we were walking back along the Croisette late at night, limos had girls sitting on their roofs sipping champagne while driving along. The next day was all about limos yet again, with the presentation of Cosmopolis...
at 23:28