So our last full day in Cannes. Since the start of the selection, I had kept my expectations low in terms of what I would be able to watch, but there was a film that was to be shown at the very end of the festival which I was dying to see, Maniac by Frank Khalfoun. Earlier in the day, I was also hoping for a third fix of South Korean cinema (aka the best cinema in the world, I will never tire of saying it).


First of all I must pay tribute to my contributor and traveling companion Georgina McAlister, whose first visit to Cannes this was. And she has been fearless, happy to wake up at 5am or go to bed at 5am, survive on very little sleep at all and happily queue for over 90 minutes under a pouring rain or the scorching sun. Even better, she turned out to be an invitation-seeking missile. On the last day, we had decided to split reviewing duties. I would try for The Taste Of Money by Im Sang Soo at 12pm, and she would try for Mud by Jeff Nichols at 3pm.

Turning up early by the Palais, the day started well. The Cinephiles Centre had scores of invitations for the Maniac screening, and strolling by the Palais, I quickly found an invitation for The Taste Of Money. While already going inside, having joined the queue early, Georgina turned up at the Palais a bit later and within five minutes, scored two invitations for Mud and one for herself to join me at the 12pm screening!

I had not seen any previous films of Im Sang Soo (in Cannes a mere two years ago with The Bridesmaid) and his new one, The Taste Of Money, had been described by a reviewer as a South Korean "Dallas". It was intended as a negative comment but it made me want to see it even more!

In it, we follow the young employee of an extremely wealthy and corrupted South Korean family, as he unravels their web of intrigues and deception. And what a guilty pleasure this turned out to be. While the subject of how money corrupts everything might not be the most original, this is still a beautifully crafted and well acted film which manages to find a really unusual yet successful balance between an OTT script and a more subtle, nearly clinical direction (I particularly liked the beautiful and very cold cinematography). I have long suspected South Korea to be the Italy of Asia, based on their cinema which is all bout bloody revenge and hot blooded characters and this confirms it, with a story and characters you would expect to find in an Italian film about an aristocratic family which tears itself apart. 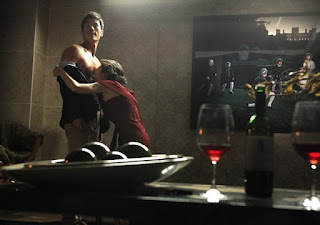 The Taste Of Money even manages a rather incredible genre shift, with a scene that had the whole Grand Palais scratch their head and utter a collective "huh?!". Integral to its success is the impeccable cast, and in particular Yea Jung Yoon as the terrifying matriarch/puppetmaster who runs the family with an iron fist. Her character might seem a little too one-dimensional at first but she is not without her depth. Particularly interesting is a scene that starts off rather comically, seeing her in full sexual predatory mode going after the family young assistant, only to turn on its head with a particularly well written scene about how the sexuality of older woman has become the object of unfair deriding.

Cannes fatigue was setting in and I decided to swap Mud for sand and sun so to speak and enjoy our last afternoon at the beach while Georgina stayed on. I gave out my invitation to an woman begging for one in the queue and her reaction was priceless! She was over the moon and even hugged and kissed Georgina! You have got to love film fans at the festival and I will never grow tired of the vibrant atmosphere there.

Later on, for our last night and very last screening in Cannes, it was time for Maniac. The film had a half midnight screening, which is not quite as prestigious as the earlier evening screenings but certainly a lot more fun. It is a popular misconception that Cannes is all about arty, experimental film but it has always embraced all genres, and those late slots are reserved for horrors and extreme cinema. The dress code is less strict at that time and it is always amusing to see Cannes glamour and horror fandom collide, with some of the audience wearing a tuxedo while others turn up in tired jeans and trainers. As we were waiting to get in, we saw the whole cast and crew of The Taste Of Money walk down the steps, then we all rushed in and ran up the red carpet, looking a lot less chic and demure than the usual gala audience.

We sat downstairs and it was a real pleasure to see producers Alexandre Aja (who directed Switchblade Romance and that other 80's tribute Piranha 3D) but also co-producer Thomas Langmann (Oscar winning producer of The Artist) as well as the short (and incredibly creepy) Elijah Wood. I mean creepy in a good way, perhaps was he staying in character but he had the maniac smile of a man who is about to scoop your brain out with a teaspoon. He is also so tiny that I never managed to get a proper snap of him.


I will not say too much about the film itself as I shall write a review of it for Cinemart, to be published on the week-end. It is a remake of the infamous 80's video nasty of the same name, about a man with some severe mummy issues and some serious difficulties with the opposite sex. A date with him usually ends up with the women being savagely killed and scalped, with that trophy piece ending up on one of his mannequins (nice). The screening was fantastic with a great atmosphere, several walk outs from unsuspecting members of the audience and lot of cheers from horror fans. The film is a a brilliant tribute to extreme 80's horrors, complete with a great electro soundtrack and a gritty look reminiscent of how dirty and dangerous American cities were at the time (even though the film is set in present day). Plus, unlike so many toothless remakes, the violence is certainly not held back for once!

It was also really nice to see that the festival had invited two of the actresses from the film, Megan Duffy and Genevieve Alexandra ("propeller girl" in Piranha 3D, eek!) to attend the premiere, even though they both had very minor roles. What a fantastic experience it must have been for both of them, probably not exactly used to the limelight, to get the whole Cannes red carpet treatment and the glamour that comes along. The film received a great reception with the audience screaming and gasping at all the right parts, and a standing ovation for the cast & crew.

And that was it, yet another fantastic day in Cannes, full of surprises... We waived goodbye to the Grand Palais while walking by one last time... until next year!