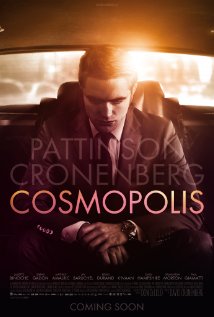 On Friday, it was the turn of one of the most expected film of the selection this year, Cosmopolis by David Cronenberg. Bleary eyed, we made our way to the Palais by 715am, hoping to get in the first screening of Cosmopolis at 830am. And within minutes of being there, we were offered two invitations. A few tips to score invitations in Cannes: a clear and readable sign (some write their life story on it!), a smile and basically looking intensely cinephile. Have you ever tried to look intensely cinephile? You need to look as if your life depended on seeing the new Kiarostami, Carax, Cronenberg... but still with your smile on, no need to look creepy.


Interestingly, we were not going to be the first audience to see it. The film was released in French cinemas on the same day of its Cannes presentation, which meant French journalists had already seen it and reviews were already out. Many Cannes films do come out in French cinemas at the same time as their festival presentation, film companies wanting to take advantage of the intense media scrutiny as the festival is a big thing in France. This year, Moonrise Kingdom, Of rust and bones, On the road and then Cosmopolis all came out this week. I can understand that but as a side-effect, I cannot help feeling it dims their impact at the festival, and any surprise they might reserve.

I have come to accept that seeing a film at 830 with so little sleep is not my favourite thing. And unfortunately, just as happened with the Killing Them Softly 830 screening, the film was a letdown, all the more cruel as with each film, my once favourite director David Cronenberg is disappointing me more and more.

Cosmopolis is a lo-fi experiment which zigzags between the compelling and the boring, mostly the latter sadly. The film, based on the eponymous book by Dom DeLillo, is meant to be a metaphor for the collapse of society brought by the financial system, but I did not think it had anything particularly original to say about it. Worst, promises had been made that this was a return to Cronenberg's experimental fireworks of his early days but it certainly is not the case. It is not without its moment, but I found the trailer to be spectacularly misleading about the tone and pace. It is mostly slow, mostly dull and far less clever that it thinks it is. In Cosmopolis, a Wall Street golden boy travels through an increasingly volatile Manhattan in a limo, on a quest for a haircut, meeting some random characters along the way, his older mistress, a pie-assassin... 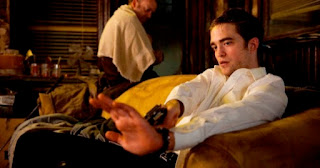 Much noise had been made about the stellar supporting cast when we first heard about the project, which included Juliette Binoche, Matthieu Amalric and Samantha Morton, yet the combine screen time of those 3 actors is about 4 minutes. There is nothing wrong with hiring great actors for cameos, but did we really need such big names and great talent for those negligible parts? They all do what they are asked perfectly well, but to think Juliette Binoche is top billed on the UK posters, when she is in it for about 37 seconds, this is nothing short of false advertising.

Robert Pattinson in the lead is actually really good, its quiet intensity for the cerebral world of Cronenberg, and it is great news that they have already decided to work together on their next film. Or it would be if I believed there was still something to expect from the once Canadian master.

I totally understand that directors cannot simply rehash their work over and over again and evolve over time, but David Cronenberg has become far too serious, I wish he would just relax and have some fun again. Videodrome and Scanners are two of my favourite films ever and I doubt he will ever top them.

The film was met with a limp, seconds long applaude and I do not expect to see it pick any prize on Sunday, despite a few raving reviews there and then, but mostly scathing ones. Speaking of which, the competition seems particularly open this year. At the moment Amour is the favourite, with Holy Motors seens as the wild card.

After this early start, we took a much deserved break from films and the festival and hopped on a ferry to the nearby and gorgeous Lerins Islands for the day, much recommended if you ever needed to get away from the madness. We certainly do not have that option at the London Film Festival! 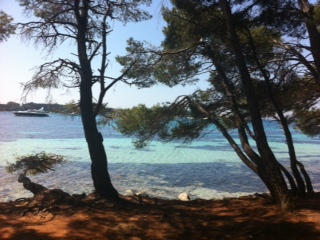