The Cannes Diaries: The Big Sleep And The Queues 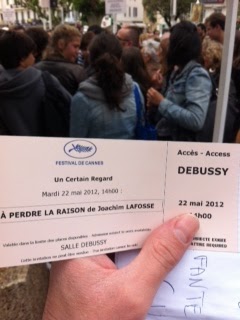 Cannes veterans do not sleep, ever, well for the whole duration of the festival anyway. But we are not veterans, and a 5am start to get to the 830am screening of Killing Them Softly with Brad Pitt on time had some not so unexpected results. Elsewhere, the queuing got the best of us... By the way, I hope you have realised that this is in no way meant to be an extensive coverage of the festival, more a report of a grassroots, guerilla festival experience.


I have the luxury of the hindsight as I am writing this, and today was a fantastic day in Cannes for so many reasons. Yesterday? Not so much. So indeed we had to get up at 5am yesterday to get to Cannes well on time to join the queue for the Killing Them Softly screening. The first screening of the day is the most popular, especially for journalists who did not get into the press screening (which are held in a tiny screen the day before the official presentation, so with 4400 accredited journalists for about 100 seats, you do the maths). It is advisable to get there for 730am, even with an invitation, as more invitations get printed than there are seats, and are no guarantee you will get in!

My favourite thing about Cannes has always been to discover films without knowing the slightest thing about them, be it the plot, or sometimes even the cast, and not having trailers and reviewers spoil them until there are nothing left to surprise you with. And the anticipation was palpable, given that Andrew Dominik's previous film, The Assassination Of Jesse James had been such a critical success.

And the film was a big let down as far as I was concerned, so much so that I left after an hour, unforgivable I know, but a very Cannes thing to do, more on this later. A gangster film which tries to be a throwback to dirtier, simpler genre films of the 40's while placing the film firmly (clumsily even) in a contemporary context, I simply felt that the film had nothing very original to offer. A great cast for sure (nice to see Scoot McNairy pop up in here, after In Search Of A Midnight Kiss and Monsters) but Brad Pitt, while delivering a solid performance as a hitman, somehow seemed to use the same mannerism as his character in Kalifornia.

And once I realised that the film was not going to improve after an hour, I did what "festivaliers" do and left, noisily. An unfortunate design flaw of the Palais seats means it is impossible to leave without them making a loud thumping noise as they flip back up. It might sound crazy and rather unprofessional (if I was a professional critic, which I am not) to leave a film half way through, but it has long been a tradition in Cannes to measure the reception of a film by the noise of seats flipping back up. Besides, with screenings being free, and with busy schedules, attendees have no qualms with leaving films, despite being willing to sell a kidney to get an invitation in the first place.


I was worried I had completely misjudged the film but a quick look on Twitter made me realise the film was getting an average reaction on the Croisette, which is probably the worst thing that can happen in Cannes.

The rest of the day saw lady luck deserts us once again. We unsuccessfully queued to try to get in A Perdre La Raison, with Tahar Rahim (A Prophet), in Elefante Blanco with Jeremie Reignier (both in Un Certain Regard), and in J'enrage De Son Absence, the second directorial effort of Sandrine Bonnaire. For each of them, queuing 90 minutes was not enough!

Ironically we then realised that it is somehow easier to see films of the official selection in the Grand Palais and its 2300 seats, than smaller selections with less capacity.

My festival companion went to see Claude Depardon's documentary Journal De France later on, but the early start, previous late night and day of queuing meant she fell asleep! Not our finest day... but fear not, things got a lot better the next day, as in today!
at 22:02