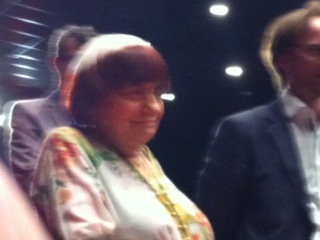 What a day today has been in Cannes, a day of sun (for once!), surprises, incredible cinema, a day that felt like a dream for a film lover such as myself. How often do you find yourself in the company of Agnes Varda and Alexander Payne?


I am not very familiar with Leos Carax's films, I have to admit. Having seen (and enjoyed) a few of his earlier ones in the 80's, I was not particularly interested in Les Amants Du Pont Neuf and Pola X. Of his new one, Holy Motors, nobody knew nothing about it, except for his intriguing cast: Kylie Minogue, Eva Mendes, Edith Scob (Les Yeux Sans Visage) as well as his muse Denis Lavant. And with a 12pm screening, we did what we have been doing best all these previous days, we begged! Amusingly, I had sent a drunken tweet to Cannes Film Festival's Director, Thierry Fremaux, asking for "une petite invitation for Holy Motors", and he responded, asking me to get in touch if I struggled! But the Gods of cinema were looking upon us today as we scored two invitations within ten minutes of arriving by the Palais.

Speaking of which, I now understand better why so many people are willing to hand spare invitations over. Professionals who receive them but do not use them simply receive less the following year. And with invitations bearing a barcode and being scanned, this is no empty threat.

But back to Holy Motors. SPOILER: I loved it. Having read several spoilerific reviews today, especially the Sight & Sound one which tells the whole story from start to finish, I shall try to say as little as possible. In it, Denis Lavant plays Mr Oscar, a man we follow through the day in a limo (how very Cosmopolis by the way!) fulfilling various "assignments". And that is it, I will not say more about the story!

But I will say that is is fantastic and exciting, an experimental but extremely assured and stylish proposition, a particularly fine treat for film lovers who will lap up its numerous film references. It can be seen as a reflection on the changing nature of acting, or cinema itself, but never takes itself too seriously.

Denis Lavant is as excellent as ever, showcasing the versatility of his talent. In short parts, Eva Mendes and Kylie Minogue are great, the former being hilariously deadpan, the latter rather moving, and so charming when speaking French. And the distinguished Edith Scob, as the driver, is an absolute joy of witty presence.

The film received a rapturous reception, and while having seen so few films of the selection, I would still predict the festival has found its Palme, critics seem unanimous so far. Besides, it fits the criteria that Nanni Moretti had laid out for the top prize winner this year: experimental and exciting.
This really reminded me what the magic of Cannes is all about, the discovery, the passion, the shared experience with an adoring and very reactive audience.

But the magic was far from over as I bumped into Edith Scob an hour later in the Croisette, yet was far too shy to tell her how much I love her... Oh well!

Later, I also experienced one of these magical Cannes moments: I had been put in contact with Agnes Varda's brilliant personal assistant through mutual acquaintances, and found myself invited to a pre-screening party in one of the private bars of the Palais, with the legendary filmmaker a few metres away from me... But yet again, I was far too shy to even speak to her. So all I got was free champagne and those shots I took so discretely.

She was in town for the special screening of the restored version of Cleo de 5 a 7, presented in Cannes originally fifty years ago. And I found myself getting into the screening room alongside her and her entourage, discovering her masterpiece for the first time. Even jury member Alexander Payne had taken a break with his busy jury duties to attend. We were treated to some friendly banter between Thierry Fremaux and Agnes Varda as the former introduced the film. 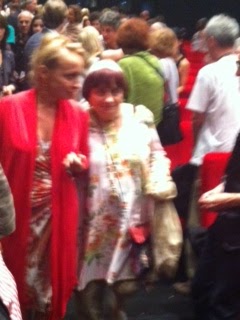 And what a true classic it is! Following a pop singer's wandering in Paris in real time over a two hours period while she anxiously waits for some medical test results, it exuded charm and elegance, in large part due to the impossibly stylish Corinne Marchand as Cleo.

After the screening, I found myself leaving the screen behind Alexander Payne, and followed him (read: stalked him), trying to pluck the courage to tell him that About Schmidt was one of my favourite films ever, but it never happened! A missed opportunity perhaps...

Of course Cannes is not the only festival where you can meet some prestigious actors and directors, with Alexander Payne being at the London Film Festival last year for a screening and a masterclass even, but it just is not quite the same, there is some magic in here which I have never found anywhere else. And as I was checking Twitter and reading updates about The Apprentice, I found myself not ever wanting to wake up from this dream...

Tomorrow, we will shun The Paperboy, in the official selection. Lee Daniels' previous work, Precious, had left me cold. Instead, we will queue for at least 90 minutes and try the last minute queue for Post Tenebras Lux. The beautiful title alone makes me want to see it, and Carlos Reygadas has got such a reputation for being experimental and slow, I am sold already! Finally moving to a hotel in Cannes also, we shall hit the town for late screenings and the nightlife.
at 22:58