The Cannes Diaries: The "Winners" 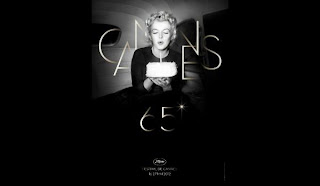 Such is the life of the casual blogger that I have not been able to write about the Cannes results until today, but I have finally found the time to do so (The world breathes a sigh of relief). While the glitzy guests of the closing ceremony were all sat in the Grand Palais, I was on the Eurostar back to London, and had my mum texts me the prizes as they were being announced (I love my mum!). I have some very mixed feelings about the results. Being a casual blogger who went down the path of guerilla festival-going as opposed to a professional journalist, I only saw ten films, and missed most of the ones who got a prize. But at large, the jury chose to almost completely shun any kind of originality and pick some safe, even average films in some cases.


First of all, the "Prix du Jury" (jury prize as you might have guessed) went to Ken Loach for Angel's Share and while I have not seen it, I absolutely cannot understand why. The jury prize is seen as the third top prize, and is usually given to a film that juries could not all agree on unanimously. And was it really the third best film from the official selection? Was it better than Holy Motors and Of Rust And Bones? Reviews indicate that it is a pleasant but hardly ground-breaking comedy from the British director.

Next up, Reality from Matteo Garrone, which picked up the Grand Prix du Jury (or Grand Jury Prize), which is the runner-up prize. While I was a big fan of the Italian director's previous film, Gomorrah (already winner of the Grand Prix Jury in Cannes in 2009), this new one targets reality TV (about ten years too late) also had some distinctively average reviews. Whatever its merits, I cannot accept that this was the second best film of the official selection.

Now before I reach the Palme d'Or, let's backtrack a little bit with other prizes. Best actor to Mads Mikkelsen. for The Hunt by Thomas Vinterberg, which I did not see. The first (and last) film I saw of the Danish director was Festen back in 1998 in my previous visit in Cannes and I never quite understood the love it, being a wholly unoriginal tale of a dysfunctional family. Mads Mikkelsen is a fine actor but the prize should most obviously have gone to the fabulously versatile Denis Lavant in Holy Motors, who portrays SPOILERS a female beggar, a leprechaun, a mo-cap model and a dying old man among others. I take it Mads does none of these things in The Hunt.

Beyond The Hills by Cristian Mungiu picked up best screenplay and joined best actress for Cosmina Stratan and Cristina Flutur. Another film I missed as it was screened before my arrival, but I was a huge fan of the Romanian director's previous film, Palme d'Or winner, 4 months, 3 weeks and 2 days. I shall reserve my judgement until I see this although several reviewers who enjoyed the film were still baffled by this prize as the script is supposed to be its weakest point. As for the actress, it is intriguing than two non-professional actresses beat favourite Marion Cotillard for Of Rust And Bones.

Best direction went to Carlos Reygadas for Post Tenebras Lux, finally a film I saw and enjoyed, in fact it was my second favourite from the festival. Rumour has it that jury members Andrea Arnold and Raul Peck made a huge push for this prize. Yet I am not entirely satisfied. Giving it best director is almost like giving in to those who have accused the Mexican director to be all style and no substance. The film does have a gorgeous and always interesting direction, but is so much more than just an empty style exercise. I was predicting Grand Jury Prize for it. 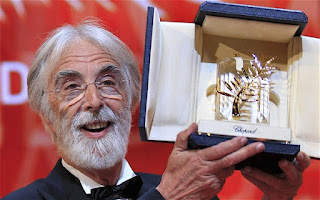 Finally the Palme d'Or went to Amour by Michael Haneke, who already won a mere two years ago for The White Ribbon. By a cruel twist of fate, this is the only film of the official selection I tried yet failed to get in while in Cannes. Critics have been unanimous and I have enjoyed many films of the Austrian director, ever since I saw my first film of his in this same Grand Palais back in 1997 (I am of course referring to Funny Games). Yet no matter how good this is, I still cannot help feeling slightly disappointed. I wish the jury had chosen to celebrate a more original film. Like Holy Motors by Leos Carax which left empty-handed despite being a fantastically enjoyable love letter to cinema, full of crazy ideas and references to several films.

I will not hide that I am a big fan of stylised, experimental films, and I can easily forgive a weak script if a film itself is full of visual and arresting ideas. Yet I am not all for originality, in fact, my favourite film of last year, Poetry, was probably one of the least experimental one you can think of, and I am all for emotions and subtlety on films.

I was concerned when Nanni Moretti was announced as being the president of the jury earlier in the year, as I have never been a fan of his films, and worse, he seems to care very little for style and originality. Obviously the president of the jury does not make all the decisions himself (unless you are Isabelle Huppert in 2009, whom I loved dearly but who by all accounts, behaved liked a tyran and antagonised all the other jury members). And I remember hearing Gerard Depardieu and Roman Polanski, both presidents of the jury (in 1991 and 1992) lamenting the negative comments the prizes they handed out received. Basically the president of the jury has double votes on everything but that is not quite enough for him to impose all his choices.

So I guess I will also have to blame Emannuelle Devos, Andrea Arnold, Jean-Paul Gaultier, Ewan McGregor, Diane Krueger and all the others.

And it truly is the end of Cannes... I shall definitely be going back next year based on this experience, and I will write a handbook of the festival within a week or so for those festival virgins itching to make the plunge next year. Watch this space!
at 23:10