The Cannes Diaries: When It All Goes Wrong... 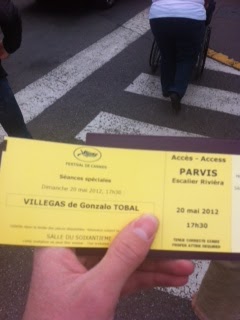 Going to Cannes after all this time was always going to be a gamble. My last visit was back in 1998 and I suspected the festival might have changed a lot since. Plus I did remember every year being harder and harder to get into screenings. It was even more of a gamble this year as we had to get our plane tickets and accommodation sorted before even knowing if your accreditation was going to be confirmed. (Thankfully it did!). So how did your first full day in Cannes go?... It was a disaster, which I could not wait to share with you, especially the British among you, who are so fond of shadenfreude...


It started off somehow promisingly. We did not get a proper press accreditation as it is reserved to the biggest blogs only, but we did receive a "Cinephiles" pass, the lowest of the lowest accreditation you can get but better than nothing. Picking our pass was quick and easy, although it was somehow disappointing that the Cinephiles area which used to be a proper area with wifi, desks and free coffee in the basement of the Palais, is now a mere tent a few metres away. The helpful staff even had some invitations to hand over (you cannot buy tickets for Cannes, it is all free but by invitations only), we were able to pick one screening only for the day, so we chose Villegas by Gonzalo Tobal, an Argentinian film in the Un certain regard selection late in the afternoon. We were also informed that we were able to get into daytime screenings of The Director's Fortnight without any invitations, subject to availability.

Having spent 6 years in Cannes all this years ago was a real help as I knew exactly where everything was, which is not obvious for a newbie, as screenings are spread in various venues throughout the city. So we tried to get into the 2pm screening of Adieu Berthe by Bruno Podalydes at the Director's Fortnight, getting there an hour before the screening was due to start. This is when everything started going wrong. 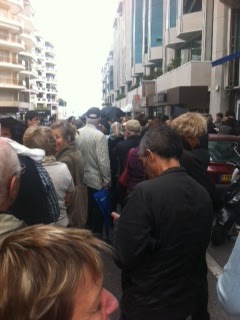 The queue was horrendous, as per the picture above, and we waited, waited... The queue moved very slowly and as we were getting closer and closer, it was too late and the screening was full.

Undeterred, and with a few hours to kill., we went back to the Palais, where a screening for Michael Haneke's Amour was going to take place at 3pm, as part of the official selection. And we did what I used to do all these years ago... and begged! It is possible to get into those official screenings without even an accreditation, by asking anybody getting in if they have a spare invitation (as the festival distributes a whole lot more of those than there are seats). My success rate doing this 15 years ago was pretty much 95% but it was not to be. You certainly need balls and guts to be doing this, as while most people will be happy to oblige if they can help, a few others will certainly make you feel very small! Despite getting my best smile out, asking if anybody had "une petite invitation", and, frustratingly, despite seeing several people near me score one, I got unlucky and as the screening was about to start, I gave up as it was full.

This is also when the skies opened, with one of the worst storms I have ever seen in the South of France, with a horizontal rain, and gusty winds that made keeping an umbrella open all but impossible. Cannes is a small and unremarkable city the rest of the year, but the festival is the second most covered media event in the world after the Olympics, in a city that is absolutely not geared to accommodate such a big crowd AND such unusual bad weather, with merely a handful of cafes to find shelters. So I had to nurse an overpriced tea sat at an outside table for over two hours, with just nowhere else to go. 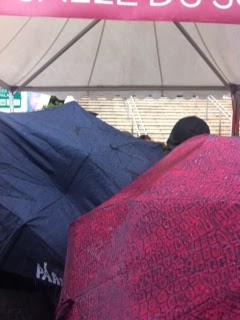 But still, I WAS going to see one film at least! So I duly went outside the screening for Villegas an hour prior to its start, clutching my invitation, having to queue in the open for 45 minutes, unable to keep an umbrella open, squeezed with a whole bunch of people under a torrential rain... Until the organisers told us that the screening was cancelled at the last minute, with no explanation...

That was the final blow, and under the bleak sky, I made my way back to the train station (accommodation issues mean we are having to spend half of our festival in Nice), with trains being delayed by up to 40 minutes because of the storm.

Cold, depressed, disappointed, feeling like we were actually living a Michael Haneke film, we DID manage to see a Cannes film today... by going to a cinema in Nice to see Of Rust and Bones by Jacques Audiard, which hit French cinemas on the same day of its Cannes presentation last Thursday. And what a film! Brutally honest, and compelling, it felt like being punched on the face and caressed at the same time. The unlikely romance between a wayward security guard and an orca trainer who suffers a terrible accident, it is gutsy cinema, with bouts of violence as well as scenes of precious tenderness, and certainly the most powerful film I have seen this year so far. Marion Cotillard is divine in it, with a completely unsentimental performance, and newcomer Matthias Schoenaerts is a revelation. Expect to see at least one of them pick up a best acting gong next Sunday.

So we did get particularly unlucky today. Things could have gone very differently if it had not rained, if we had got to the "Adieu Berthe" screening a mere 15 minutes before, if I had had a bit more luck scoring an invitation for Amour, and let's not even mention the cancelled screening, which had not happened ever before despite seeing over a hundred films over six years in the past in Cannes.

Surely tomorrow can only get better, SURELY?