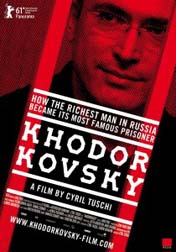 Khordorkovsky, a documentary by Cyril Tuschi, is the fascinating story of how the richest man in Russia, Mikhail Khordorkovsky, was sent to prison in Siberia by Vladimir Putin. Now into his ninth year in prison, Khordorkovsky began to support the political opposition, and challenged the power of Putin. So this being Russia, Putin got the secret service to arrest Khordorkovsky in a dramatic raid on his private jet, and send him to prison.

In order to show at least some semblance of why they were doing this, they invented ‘tax evasion charges’ and later ‘theft of oil’ (from his own oil mines none the less). There are many who believe that Khordorkovsky truly is a thief, but this documentary goes behind the story fed to the Russian public, and gets the heart of the subject – how one man can become so wealthy, gain so much power and then lose it all. The son of chemical engineers , he followed in their footsteps and studied chemical engineering in Moscow in the 80’s and then went on to set up a software company with some fellow students.

This led them founding one of Russia’s first private banks. Khordorkovsky was eventually able to purchase Yukos, the previously state owned oil company, which he turned into what was considered one of the most well run and transparent businesses in Russia. He started attracting international investors and even hobnobbed with George W Bush. The 90’s were good to him, but this world collapsed on him in 2003 when he was arrested.


What unfolds is the intensity of Khordorkovsky, who has an aura around him of an intelligent man, who won’t back down on his ideals. He has been quoted as saying ‘I am not an ideal man, but I am a man of ideals’. When he was warned of a possible arrest, many tried to persuade him to flee Russia, like so many wealthy business men have done. He could have gone to Israel, like some of his former colleagues, and as a Jew he has the option to live there. Khordorkovsky though, is steadfast in his refusal to back down and take the easy way out.

He has said he would be willing to die in jail if that’s what it takes. The last trial was in December 2010, and he was again convicted and sentence to imprisonment till 2016. The international community is backing a retrial, but as shown in the past, it’s unlikely the Russian government will take any notice. As we have seen, the Russian public is starting to protest at the injustices of the current leader Medvedev, who along with Putin are now viewed as being in the party ‘of crooks and thieves’. Only when a new leader is in power will Khordorkvosky stand a chance of a fair trial.


Five years in the making, Cyril Tuschi, a German filmmaker, interviewed over seventy people and gathered around 180 hours of footage. Tuschi brings a gentle touch of humour to the film, and also appears throughout conducting interviews. This is his first documentary, and after the success at the Berlin International Film Festival in 2011, we should see him do more documentaries as he is a natural in the role of inquisitive foreigner. Tuschi went through a lot to make this film - his presence was not welcome and he was followed by the secret service.

There is a grainy homemade feel to some of the footage, but he also captures the wide expanses of this enormous country. Like China, Russia is so big that they are in their own world, where no one else matters. It’s interesting to look into the story of such a mighty downfall, though I was left with the feeling that Khordorkovsky will not fade silently into the background. We may see him one day ruling Russia, and the fan club of elderly ladies who are protesting in Moscow for his release will be very pleased!

Khordorkovsky is out in the UK on the 2nd of March.