Sunday proved to be one of the sunniest weekends we have had in London for a while, and I managed to get a bit of time outside in between films at the LLGFF this weekend. The two films I saw - 'The Perfect Family' and 'Mother Tongue', both had a common theme - mothers coming to terms with their daughters sexuality, but how the subject was dealt with was completely opposite.


The Perfect Family, from director Anne Renton, is a very funny film about a woman who has been nominated as 'Catholic Woman of the Year' at her local church. As Eileen, we have the marvelous Kathleen Turner, who is brilliant in the role of the self sacrificing housewife intent on serving god in order to gain forgiveness for her sins. When her daughter Shannon comes out, she also announces she is five months pregnant and planning to marry her girlfriend. Her refusal to acknowledge her daughters relationship, means things are very strained and she is excluded from her daughter's life.

Emily Deschanel, is great as Shannon, the 'perfect' lawyer daughter - as long as she doesn't bring up the L word. In order to secure the award, Eileen has to present her family as good catholics and model citizens in the eye's of the church - not easy when her son has left his wife and children, her husband is in AA and her daughter is a lesbian. Complications with the pregnancy draw the mother and daughter together, as Eileen - ever the helper- starts to spend time with Shannon.

There is a subtle charm to the film, in the representation of average middle America and the modesty of the characters. Although Eileen is considered by many in the community to be a wonderful person, her own failure to help and understand those closest to her, has lead to an alienation from her family that many LGBT people will have experienced first hand. Speaking from experience, coming out is so much easier when your parents are atheist. A balanced view of the catholic church is shown though, as we see from a more accepting younger priest. The casting is excellent, with the wonderful Richard Chamberlain, as 'Monsignor Murphy', and  Jason Ritter as the son.

Great to see Kathleen Turner on the big screen again - she was one of my favourite's from the 80's. Listening to the Q&A after the film, I found out she also exec produced it and suggested a few script changes before she would come on board. Renton did what was needed and once Turner had signed on getting the rest of the cast was easy. This was the UK premiere and what better way to see it than at the festival. Hopefully it will get released in the UK, as it has universal appeal. 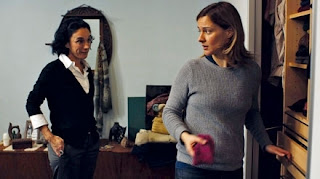 Mother Tongue (Lengua Materna) is the second film from  Argentinian director Liliana Paolinelli. She also wrote and produced the film. When Ruth decides to come out to her mother, she should of made sure she was lying down. Estela faints and so begins the story, and hospital visits as elderly housewife Estela comes to terms with all things Lesbian.

Ruth has been with her partner for 14 years, and for some reason her mother has never had any idea that anything was going on. Estela, played by the wonderful Claudia Lapaco, is so sweet as the behind the times mother, who starts reading about lesbianism and drags her friend along to a women's bar for bingo night. Ruth is not so keen on this sudden interest her mother is showing in her life, and prefers to keep her distance. The impatience that Ruth has with her mother is probably familiar to many, and the ups and downs of mother/daughter relationships is true to life.

Ruth's girlfriend Nora, is also not welcoming the new attention from Estela and the unannounced visits. Gradually though the women welcome Estela into their lives. Estela was nicely dressed for her age but I must say, and this is true with many Argentinian films, the wardrobe choices are so bad. So whilst the film was released in 2010 in Argentina, it was the feel of something that came out in 1996. Having visited Argentina a few years ago, the people do not all dress so bad but why are the films so often showing this dated look?

The first two thirds of this film works so well, and there are plenty of laughs, its just after things get rocky for Ruth and her partner that I felt the story somewhat fell apart, leading to a very abrupt ending that had many in the cinema puzzled. Its a shame when a film that starts so well, takes such a turn and leaves a sour note. There was no Q&A so we didn't get the chance to find out more.
at 21:56