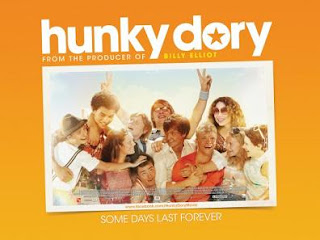 Set in South Wales in 1976, Hunky Dory is a fun rollick through the trials and tribulations of drama teacher Viv (Minnie Driver), as she gets the students ready for the end of term performance of a rock musical based on Shakespeare's 'The Tempest'. The action takes place during a heat wave, and most of the kids are more intent on skiving off to the lido (swimming pool for those non-British readers), than spending time rehearsing. The story focuses mainly on Viv, and her collection of long hippie dresses and abundant curls, but the lives of her students are interwoven. Viv has seemingly failed to make it in London as actress, and is now back in Wales teaching.

The brilliant Aneurin Barnard stars as Davy, who is playing the male lead in the musical. His mother has left the family, and he has to deal with his younger brother's anger and alienation, whilst suffering his own unrequited love. He brings to mind a Greek statue, with his finely chiseled features, and is sure to become a heart throb for many, he is destined for big things. Davy is in love with Stella, Danielle Branch, who reminded me of a slimmer, younger Martine McCutcheon - possibly due to the horrendous 70's eyebrows she sports for this film! Stella has older guys on her mind, and despite their chemistry as she plays the female lead in the musical, she shows no interest in Davy.

Into the mix we also have cherubic blonde Tom Harries, as Evan, the sexually confused teen who develops a crush on Davy. The most sympathy is for Kenny (Darren Evans), whose older skinhead brother bullies him into joining up as a skinhead, whilst his gawky appearance makes him a target for the school bullies too. Robert Pugh is the Headmaster, he does a great job as the lovable fuddy-duddy, who ends up taking on the part of Prospero. I really liked the French teacher Sylvie, Julia Perez, who brings a delightful comedic tone to what is quite a funny film, with several laugh out loud moments.

Directed by Marc Evans, whose last film was Patagonia (about a Welsh couple who travel there to work on their differences). This is a complete change of scenery but its beautifully captured through the hazy summer afternoons and gentleness of the Welsh countryside. Laurence Coriat (who also co-wrote Patagonia with Evans) has written a script that melds the different characters well, but also lets the music shine through. With a mix of Bowie, Lou Reed, Beach Boys, ELO and Dusty Springfield, the music becomes an escape from reality for the kids, and as they rehearse a chance to forget about the fact that in Thatcher's Britain, the prospects were bleak for many of them.

Viv seems to be thwarted at each turn though, as most of the other teachers consider drama class a waste of time, and some of the parents even ban their children from participating. She puts up a good fight though, especially with the evil social studies teacher and misleadingly named Mrs Valentine, well acted by Haydn Gwynne. Even the PE teacher is against his rugby players spending time on the musical. Although there is no love interest for Viv, she does become the object of Davy's affections, and this leads to one scene which I felt to be quite badly handled in more ways than one, and completely unbelievable.

Hunky Dory should be very popular with the young adult market and the over 45's, it is those of us in the middle who would perhaps not be so enthused, having no real link to the music of the period (I was 3yrs old in 1976 so probably singing 'I'm a little teapot' was the extent of my song choice). However, I liked the film a lot more than I thought I would and I found the ending especially touching. For anyone who came of age in the 70's, this is going to be a delightful trip down memory lane, just let the music take center stage and enjoy a Welsh Glee, with all the understated charm that British films sometimes do so well.

Hunky Dory will be out on the 2nd march in the UK & Ireland.