This Is Not A Film Review 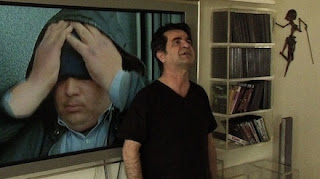 This documentary about award winning director Jafar Panahi (Offside 2006, The Circle 2000 & The White Balloon 1995) is an intelligent and thought provoking insight into his current life in Tehran. Filmed over the course of a day whilst under house arrest in March 2011, some of the footage was shot on an iPhone, and had to be smuggled into France in a cake for last minute submission to Cannes.


This is an entertaining and humorous look at how someone so internationally respected and important as Panahi, can be imprisoned in his own country. The eventual charge in December 2010, was for 'assembly and colluding with the intention to commit crimes against the country's national security and propaganda against the Islamic Republic'.

Against a backdrop of the 'Persian Wednesday Eve Fireworks' explosions (Chaharshanbe Suri), which I initially thought were gun shots firing at civilians in the background, we see Panahi go about his daily life. Interestingly, Chaharshanbe Suri is an important non-religious festival for Persian people, that celebrates fire and life, along with the arrival of Spring. Bonfires are lit to 'keep the sun alive until morning', and fireworks go off as people try to leap over the fire. It is thought that all this will lead to enlightenment and happiness throughout the coming year, and puts an optimistic slant from Panahi on his situation.

Stuck in his apartment in Tehran, the visits to the balcony afford views of the city, that are now his only access to the outside world. The internet is restricted and you get the feeling that even on the phone, he has to be careful with what he says. The film starts with Panahi having breakfast, and we follow him throughout the day as he plans a shoot on the living room floor for a script that was denied approval by the government, interacts with neighbours, Mirtahmasb (co-director) and even the buildings porter. Interesting snippets from some of his previous films are shown as he discusses his ideas. In the background there is Igy, his daughters pet iguana, who does a great job as supporting actor.

Denied permission to leave Iran in Feb 2010 to travel to the Berlin Film Festival, where he was to participate in a panel, this has been followed up by time spent in prison. It was actually Juliette Binoche who first brought world wide attention to his cause. When accepting a best actress award at Cannes for 'Certified Copy' (directed by the Iranian Abbas Kiarostami), she held up a placard bearing his name. This is believed to have led to his early release from prison.

Whilst it's not just Panahi that the Iranian government is persecuting, he is the most prominent, and it's this which has lead to the support from the international film community - Loach, Scorsese, Malick and the Coen Brothers, to name a few. An Amnesty International petition has been set up for him, and hopefully this worldwide support will eventually lead to his lawyers getting him off the charges brought against him. Panahi is a creator at heart, and no twenty year ban from film making, plus a six year prison sentence will stop him from his desire to create.

Co-Director of this 'non-film' is Mojtaba Mirtahmasb. He made his name in Iran by making documentary's about Islamic Art, and then went onto collaborate with many fellow Iranian film-makers. He was prevented from leaving Iran in September 2011 to attend the Toronto Film Festival, where 'This is Not a Film' was screened, and was forced to spend three months in prison, on the charge of 'collaborating with the Persian BBC'.

The way the two directors work together throughout the day is summed up by Mirtahmasb's comment, 'They say when hairdressers have no customers they cut each other's hair'. For anyone with an interest in documentaries, Iranian cinema and human rights issues, this film is a must.

This is not a film 2010, Iran. Directed by Motjaba Mirtahmasb, Jafar Panahi. Starring Jafar Panahi