The Lair Of The White Worm At The Horse Hospital 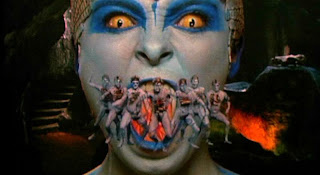 Scala Forever, a retrospective for the late and infamous British director Ken Russell who passed away recently, is taking over London at the moment. Over two weeks, several of his films are being shown in various venues across the city, including the lesser known The Lair of the White Worm, which was shown at the Horse Hospital last week. The film is not available on DVD and that I had always promised myself to watch ever since I caught a glimpse of it on late night TV as a horror-fan teen.


Before I even write about the film I cannot not mention the actual venue. The Horse Hospital is an art space that does the occasional film screenings and is as miles away from a multiplex experience as it can get. Tucked right in the middle of Bloomsubry in London, mere minutes away from the Renoir cinema, the Horse Hospital is in a side, cobbled street and the whole area is so atmospheric, with one of those typical old pubs right opposite that looks century old, it makes you wonder whether you did find platform 8 1/2 after all. You enter through a descending tunnel (presumably where the horses would go if there were any), and you end up in a small screening room that is part village fete, part cabaret, with a small bar with a red light and incredibly uncomfortable metal chairs that mean a collarbone infection is never far away. The perfect venue to see this truly bonkers minor classic.

So for the white worm. In it, the mysterious Lady Marsh (Amanda Donohe) returns in her mansion in the country with some nefarious plans in mind. For she is an immortal snake goddess, worshipping a pagan god, in the look out for her next human sacrifice. Nearby, a Scottish archelogist (Peter Capaldi) finds the skull of a strange creature in the ruins he is excavating. 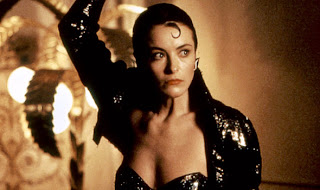 Unlike so many bad films that are hilariously bad even though the director was earnestly believing he was on to great things (I'm looking at you, Tommy Wiseau!), there is no doubt that the director of The Women knew exactly what he was doing. Transposing a lesser known novel by Bram Stoker (Dracula) to a modern setting, he indulges in his favourite imagery and themes. There is a strong whiff of anti-christianity, and he likes nothing more than putting phallic symbols in every single frame.

Despite an obviously limited budget, he does let his flowery direction go loose, especially in the hallucinary/dream sequences that include much religious blasphemy and the kind of not particularly successful blue-screen work that reminded me of pop videos of the era, especially Comanchero, if somebody within the most enlightened amongst you remembers it.

The acting is half incredible, half atrocious. The former is largely due to Sammi Davis, who utters her line in a wooden and tone-death way, much like that lady who does the Masterchef voiceover, and Catherine Oxenberg (of Dynasty's "fame"). Amanda Donohoe as Lady Marsh on the other hand, is absolutely fantastic and her creation deserves to become a horror icon. I just loved the way there is so much inconsistency in her character. At times she is this slightly mischievious woman with a killer 80's wardrobe that you would imagine to be friend with Alexis Carrington. Other times, she is this venom spitting, virgin sacrificing demon. And yet the British actress understands perfectly what Ken Russell wanted and gives a memorable performance that is the perfect match for the OTT direction. The scene where she is lured out of her mansion through some snake-charmer tune (don't ask) and she slithers her way out seductively has to be seen to be believed. 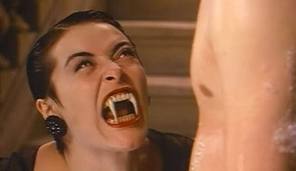 If there is a surprise however it is Hugh Grant. Best known at the times for a flurry of floppy haired turns in period dramas, he offers a brilliantly knowing and tongue-in-cheek performance, with more raised archbrows than even Roger Moore ever managed. There is a scene involving him and Amanda Donohoe having a discussion about her alleged fear of snakes and how she plays snakes and ladders to confront him that is hilarious in a British, deadpan humour kind of way. Watch out also for a young Peter Capaldi (aka the angry Scot in The Thick Of It) with an even bigger floppy hair.

The Lair Of The White Worm is certainly not remembered as one of the best of Ken Russell, but as a guilty, so bad it's good type of film, and for amateur of dodgy 80's horror, it is recommended. It is not available in the UK but you can find it on DVD in the US and Germany apparently.