Why Are We All Fighting About John Carter? 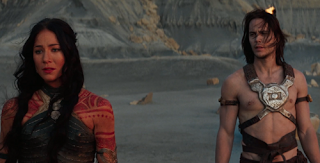 John Carter, this year's big first blockbuster, opened last week end. If you have read my review, you will know how much praise I had for it. You will be very hard pressed to find a measured article about its opening week end results though. It has been called anything from a huge flop, a disaster, a success, a modest success... It seems that even before it opened, some had decided that it was bound to fail. Why has this happened?


These are the figures: John Carter opened to a $30m domestic tally in the US on its first week-end, and $70m worldwide, so a total of $100m. Its budget was $250m and if you add in the marketing and distribution costs, it has been estimated that the film needs to make $500m to break even. It is true than its domestic result is less than stellar. As a comparion, something like Jackass 3D opened to $50m. A mega blockbusters these days (we are talking the Spiderman sequels, The Dark Knight etc...) would open to $150m. Even a more grown-up, leftfield film such Watchmen opened to a strong $60m in 2009 without the help of 3D premiums.

What is really strange is that it seems to be getting some wildly different results depending on the market. Its opening in Italy was abysmal, decent in Australia, average in France and the UK, yet it had the biggest opening day ever for a film in Russia. It is unheard of for a blockbuster to suffer such huge discrepancies in its worldwide opening figures.

But what is really interesting is that a lof of journalists have wanted it to fail from the start. It sat on 50% on Rotten Tomatoes, which clearly is nothing amazing, but it certainly has not sunk to any of the lows routinely achieved by some of the loudest summer blockbusters such as the Transformers sequels, which had deservedly garnered some savage reviews.

It almost seems that a certain sort of film press, and even general press (I am looking at you the Guardian in the UK!) had decided that it was going to be a flop. Journalists wanted their sentionalist headlines, so roll on the Guardian which talked over an inflated budget of $300M while ONLY mentioning its US opening of $30M, conveniently ignoring the more than decent worldwide count. And it is a real shame because if they had wanted to sacrifice a blockbuster on the altar of bad cinema, they certainly picked the wrong one. Because I can understand (and share!) the hatred towards any recent Michael Bay film, any Pirates of the Caribbean sequels and any loud and hollow that has been made with scant respect for the audience (which still flocks to it, go figure!). But not for an earnest and entertaining film, mercifully devoid of any irony and post-modern jokes. 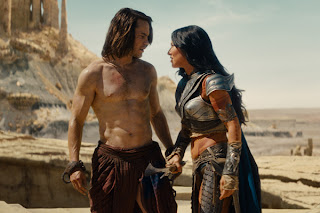 In fact, the only measured article I have read about some reasons of his relative success/lack of is in the Huffington Post. In it, it commented how Andrew Stanton has his share of responsibility as well as, as we all know too well, the confused marketing. The director had too much confidence in the original material, which sadly means very little for most of today's audience. And he was unable to deliver the kind of flashy, effects heavy trailer that studios usually release month in advance to whet's the public's appetite, choosing instead a moody, atmospheric (and incredibly impressive I thought at the time) but perhaps too slight one, as below.

As for the marketing, it seemed unsure about how to sell it, doing a real u-turn a few months later releasing some effects and action heavy trailers that confused the audience more than anything. It did not help that it has become incredibly difficult nowadays to open big when a film is not part of an established franchise or based on a well known original material. Sadly it seems that a large part of cinema-goers just were not interested.

It is hard to say whether it will have some legs, and there has been some very enthusiastic support from esteemed journalists such as Anne Billson, plus the word of mouth was generally positive. Still, it might not be enough, and it will face some heavy competition from 21 Jump Street (who is incredibly sitting at 94% on Rotten Tomatoes) this week and especially The Hunger Games next week, which is coming up with some crazy tracking figures predicting an opening of over $100M!

But if you have not see it yet, I cannot recommend it enough, two hours of pure escapism, a real slice of innocent entertainment that is so rare to come across these days.
at 23:05