Helen Mirren Is A Cenobite: The Tempest 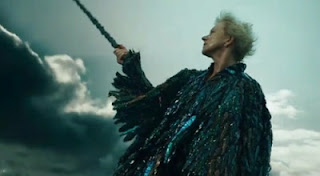 This will be a short review as I have not quite understood all that was going on in this film. Shakespeare's play The Tempest is proving a tough one to adapt. Over 21 years ago, Peter Greenaway tried it with Prospero's Books and it was widely regarded as his worst film, mainly because of his over-ambitious and misguided use of (at the time) groundbreaking CGI. And now Julie Taymor has tried (and failed yet again) to transpose it to the screen in a satisfying way. Interestingly the best, if slightly loose adaptation of the Bard's less known play remains the classic sci-fi Forbidden Planet.


So back to Julie Taymor, who has made the headlines for all the wrong reasons recently, with her tumultuous Broadway musical Spiderman: Turn Off The Dark, which had more opening nights announced than Return of the King had endings. This is not actually her first Shakespeare adaptation, she made the little seen Titus Andronicus back in 2000, a frankly fantastic film, whose furore and constant visual inventiveness was fitting for its brutal plot. Her mash-up of the Roman Empire and fascist Italy worked surprisingly well and she conjured some unforgettable images, such as Jessica Lange and her knives-helmet.

But what was a calculated chaos in her previous film here is just a mess and makes it even harder to follow than in Propero's books, feeling more like a collection of disjointed scenes. The story of a magician in exile on an island with his daughter, who plots against his enemies here sees Prospero being replaced by a female Prospera (Helen Mirren) but apart from that, the film follows the play fairly closely. A male nymph prances around singing like Enya. Russell Brand prances around being Russell Brand. Djimon Hounsou prances around caked in mud. Helen Mirren thumps the floor with a big stick repeatedly shouting out Thou! Thee!, looking like the unlikely daughter of Dune's Sting character and a cenobite. 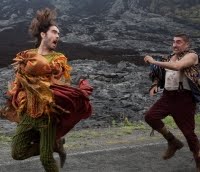 I cannot deny that Julie Taymor has a certain visual flair, but it does not seem to have evolved much in a decade and it is not helped by some jarring CGI effects. She comes from the world of the stage and it shows, just like a Broadway/West End musical, her film is brash and noisy, and all tarted up with little space for subtlety. Her baroque and garish art direction sometimes works wells (Ben Wishaw as a raven demon), sometimes less so (Ben Wishaw again as a bee demon), and other times make her cast look like they have been rolled into the wardrobe of Joseph and the amazing technicolor dreamcoat wearing velcro patches.

Just as I was writing this review I saw a few more questionable scenes: Russell Brand being chased by a "muttation" with crayon'ed flames, and a perspective trick involving some upside down stairs that was popular in the 80's (Labyrinth, A Nightmare on Elm Street 5...)

Do yourself a favour, watch Titus Andronicus instead, I suffered through this whole sorry Tempest so that you do not have to.