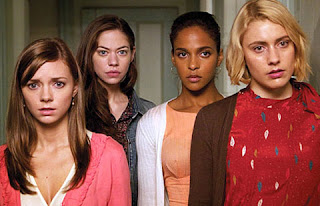 After a hiatus of more than 14 years, director Whit Stillman is finally back. The master of subtle and witty indie comedies such as The last days of disco and Metropolitan has a wonderful new film out, Damsels in Distress. It follows a trio of sorority girls and their honest but misguided attempts to help out fellow students. The film is out on the 27th of April in the UK but if you enter the competition below you have a chance to see it at a special preview screening followed by a Q&A with the director. Read on!


Damsels in Distress was shown as a surprise film at the London Film Festival, and as a fan of Whit Stillman's previous films, it did not disappoint me, in fact, it was my highlight of the festival. His usual, wonderfully well written and eminently quotable dialogue is still present, but the tone is more whimsical, with some added quirks which provided many laugh out loud moments.

The acting is uniformly excellent, led by mumblecore queen Greta Gerwig. Having previously got her head blown out in House of the Devil and starred in the most awkward sex scene ever in Greenberg, in here she shines, with a deadpan performance that shows that she is perfectly comfortable with humour. And a special mention has to be made for Megalyn Echikunwoke as one of the Damsels, whose delivery of "playboy opERAtor" deserves an acting award of some sort.

The film is out on the 27th of April in the UK but the lovely Gate cinema in Notting Hill in London (aka my favourite London cinema) has a preview screening on the 12th of April, with, as the icing on the cake, a Q&A with director Whit Stillman. This is a not to be missed opportunity especially since, for all we know, he might take another 14 years to make another film. (I wish former notorious procrastinator Terence Malick had a pep talk with him). You can read more info about the screening and Q&A here.

And courtesy of the Gate cinema, I have two pairs of tickets to give away. All you have to do is to answer this easy question:

In what horror film did Greta Gerwig star:

E-mail your answers to Filmlandcompetition@gmail.com  or tweet me the answer on twitter (@FilmLandEmpire) using the hashtag #FilmLandCompetition