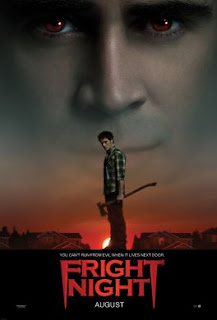 With the ongoing merry-go-round of 70's/80's horrors remakes, it was only a matter of time before somebody brought their attention to Fright Night (1985). It might not quite be up there with such horror classics as Friday the 13th and Halloween, and have the same iconic imagery, but is still fondly remembered by those who have seen it thanks to its successful balance of scares, wit and laughs.

When the 3D remake was announced last year, it became quickly apparent that it was not going to be some cheap cash-in however. A director plucked from the indie world was on board (Craig Gillespie, who directed Lars and the Real Girl) as well as a great cast you certainly would not expect with that sort of films: Colin Farrell, David Tennant, Toni Collette...


For those who have not seen it, the original Fright Night had a teenager discover that his new next door neighbour was a vampire. Assisted by his over the top best buddy Evil Ed, and washed out horror TV host Peter Vincent, he set out on a mission to rid the world of the undead creature.

As beloved as the original is, a too faithful adaptation would just not have worked with a modern audience, so it was a film whose remake was set to benefit the most from a modern re-imagining. And this is precisely what has been done, with great success. 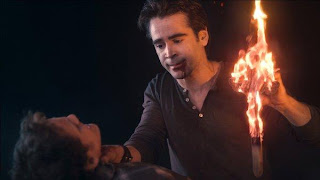 While the original premise remains the same, in here, gone has the "Rear Window" subplot, which saw the lead spends much of the running time trying to convince the world of the true nature of his neighbour. With today's Twilight/horror savvy teenagers, it would just not have appeared credible and the film wastes no time sinking its teeth into some vampire action, so much so that it could have actually done with a little bit more exposition. And the transposition to Las Vegas, which sounded odd at first, works perfectly well as a background of moral decay and anything goes lawlessness.

The best thing to do is to forget about the original, and enjoy this as a Saturday night entertainment, to be seen in a busy cinema with an up-for-it audience. Director Craig Gillespie fully embraces the 3D pop out gimmickry that many are trying to avoid, and the film is all the better for it: creatures of the night explode in full 3D bloody glory, all sort of pointy things (including a stake, obviously!) come out at the audience... And you are on for a fast-paced, fun ride that never takes itself too seriously yet has enough respect for its audience to deliver what it promises. Mercifully, this is no toothless PG13 monstrosity (I'm talking to you, Shark Night 3D!) and it does not shy away from gore.
The acting is a little hit and miss. Anton Yelshin lacks charisma and likeability as Charley Brewster, and Toni Collette is underused even though her part is a step up from the original (I wonder if her presence if due to her previous collaboration with the director on the TV Serie The United States of Tara). Evil Ed however is the only real misfire in here. The original part had been made so iconic by Stephen Geoffreys (who incidentally, as I found out on IMDB, has since become a gay porn star!), that it was a tough act to follow. And kudos to Christopher Mintz-Plasse for not trying to mimic him. But his part has been reduced and a plot development involving his character happens far too soon, which does not give him much chance to shine.


Colin Farrell however, as the vampire neighbour, owns the film. The original character was the sort of more mature, seductive man your mum would have swooned over. Here Colin Farrell is like a throwback to the actor's own wilder years, a thoroughly modern and fun-loving creature, as magnetic, seductive and predatory as you could hope for, oozing sensuality and menace, and living in a contemporary bachelor pad miles away from the original Hammer like mansion. With him, the relocation of the action to Las Vegas truly makes sense, as this is exactly the kind of place you would imagine his character to be living in.

And David Tennant, in the part of Peter Vincent, manages to pull off what seemed a tricky character on paper. Gone is the older TV show host in the original, in here, in what is the biggest departure from the 80's version, he has been turned into a "sexy" gothic Las Vegas magician with sprayed-on leather trousers, a sort of Criss Angel with a sense of humour. And the Doctor Who actor is absolutely hilarious, showing a fun side of him we never knew existed. His banter/lover tiffs with girl-friend/assistant (played by Sandra Vergara, sister of Sofia), add to the humour.

Is it as good as the original? Of course not, and I doubt this will ever been remade in twenty five years. It is its own film and the director deserves some praise for having the courage to take it in a completely new direction. It certainly is a guilty pleasure and a cut above the majority of 80's remakes of the last decade, and one to be enjoyed in a packed cinema.

I shall finish with a piece of trivia. The original Fright Night's French title was: "Vampire, did you just say vampire?". Ridiculous, I know. After all, this is from the country who has given us The Teeth of the Sea (Jaws) and Is there a cop to save the Queen? (The Naked Gun)!


Fright Night (2011) Directed by Craig Gillespie, starring Colin Farrell, Anton Yelchin, David Tennant... Out in the UK on the 2nd of September