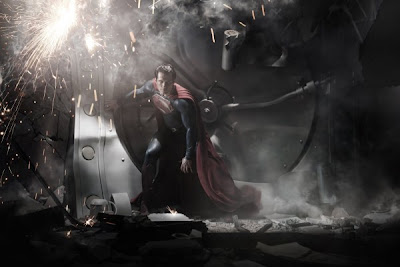 It is a sad state of affair when pictures of films which are not due out for one year, or two years even, are being discussed. So let's follow this trend enthusiastically, since pictures of British thesp Henry Cavill as the man with the cape, and Anne Hathaway as Catwoman have now been released.

First off, Superman, the Man Of Steel. Produced and written by Christopher Nolan, directed by Zak Snyder, the Superman reboot is not out until Summer 2013, after its original Christmas 2012 release date was moved. Eyebrows were raised a few months ago when a British actor got offered the part of the quintessential American superhero (saying that, nobody said a thing when Canadian Chris Evans became Captain America!).


Yet, the actor, soon to be seen in Greek mythology CGI fest Immortals, seemed like an inspired choice based on his physique, with the perfect jawline and the steel blue eyes, but also a little less clean-cut appearance than Christopher Reeves and Brandon Routh, and a brooding intensity hinting towards a marked departure from the previous incarnations. Very few actors can get away with wearing such a costume and he certainly seems the one to pull it off.

A first look at the picture made me wonder if it was an efficient fan-made job, but no, it is real, and I have mixed feelings about it. On the good side, it really looks like the Watchmen director is taking Superman in a whole new direction, with a darker and edgier look than the far too earnest tribute/adaptation Bryan Singer made in 2006. The suit is made of the now usual reinforced material also used for the new Spiderman, although the S of the costume has got bigger again, after being reduced in the 2006 film. We cannot see whether he is wearing his pants over his trousers, but he would better be, I cannot imagine Superman without his pants over this trousers!

What I cannot get is the bouffant hair of what seems to be a flattened head. It slightly reminded me of Flattop on Dick Tracey so I just hope it is an odd angle.

And on to Catwoman. While it is pretty much a given that nobody will ever match Michelle Pfeiffer in the iconic part, at least Anne Hathaway is safe in the knowledge that she just cannot be as bad as Halle Berry in the awful 2004 adaptation. With no plot leaked yet, everybody has been wondering what Catwoman is doing riding the Batpod. In keeping with the more realistic approach Christopher Nolan chose for his Batman films, the costume has got nothing to do with the iconic one in Batman Returns.


In fact it makes you wonder if she is actually wearing the full costume. And what with the bluetooth/swimming goggles/3D glasses? Is she actually more of an ally of the bat in this version, having been given full access to all of his gadget wizardry? Or, closer to the comic books, is she actually a thief, having got her paws over all of Bruce Wayne cool gizmos, with the smile of a cat who got the cream? One thing is certain, her suit might be realistic, but it is not very cat-like at all, so what is going on there? Rumour has it that the picture had been stolen and was going to be released, forcing Warner to officially let it out in public which might explain why it is a little underwhelming.