Impressions on a BigScreen: UK's ComicCon 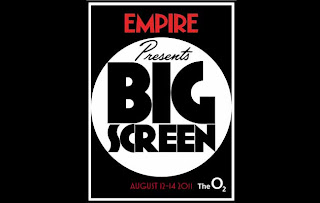 During this week end, the first edition of Empire BigScreen, a three days film event which has been billed as Britain's answer to San Diego ComicCon (the mother of all film conventions), it taking place in London in the UK. Previews, talks, showcases of upcoming films, classics, appearances from various actors and directors, the schedule is packed. There had actually already been a similar event in the past, but in its previous incarnation, it was set in the much, much smaller NFT and seats would sell out within nanoseconds. This new revamped event allowed for much more bigger experience, even if, and let's be charitable, the organisation left a lot to be desired to say the least. Today was so full on that it would be impossible to cover it all, so I will just mention the highlights.

Both the highlight and the low point of the days were actually the screening of two very different films. The surprise screening turned out to be the amazing Drive by Nicolas Winding Refn, which confirmed all the promises that Danish director had showed previously, and hails Ryan Gossling as one of the most interesting actor at the moment, with an absolutely incredible performance, cool and assured, and full of raw masculinity. Cowboys vs Aliens on the other hand might has well been called Close Encounters of the Dull Kind and was a real let down. Both reviews will be published in the next few days.
The showcase section today concentrated on EOne, Sony and Momentum Pics. Several trailers had actually been seen before on the internet although they made a bigger impact on this incredibly big screen, and some were backed up with some extra footage.
The Amazing Spiderman trailer for example, which was presented in an extended version of the teaser previously seen, looked partiularly great in 3D especially the last part of the trailer with the POV scenes. And then some extended footage was shown, which is all looking very promising. It confirms the grittier and moodier vibe of the trailer, with Peter Parker presented as even more of an introspective and shy geek than Tobey Maguire. We also got a first look at the villain, Dr Connors who turns into the Lizard after an experiment to regrow his arm goes horribly wrong. The effects were not quite finished but the CGI did look impressive. I do wonder how much of an interesting villain the Lizard can make, with none of the moral ambivalence of Dr Ock in Spiderman 2, but I hope to be proven wrong. And Andrew Garfield as Spidey shines, proving to be an inspired casting choice.
Another highlight of the showcase that took everybody by surprise was the footage of the Total Recall remake, by Len Wiseman, the man behind the Underworld franchise. I am not suggesting that he could possibly have made a better film than Paul Verhoeven, but the short scene we saw, a pivotal one which will be familiar to those who saw the original film, was incredibly impressive, especially for its art direction far away from the rather cheap plastic look of the 90's version, and which seems to come straight from Blade Runner, with a gritty neon/Asian/futuristic style that looks fantastic. The film is far from finished so we were also treated to some sort of animated storyboard that was pretty exciting.
There was also a Steven Soderbergh double bill. First of all some unseen Contagion footage, which is probably the film I am the most excited about this autumn. Carrying on from the terrifying trailer, we see several scenes at the start of the outbreak with the carriers merrily and unwittingly spreading the virus around as they go about in their globe-trotting ways. Guaranteed to make all of the audience whipping out the anti-germs gel after that, I can promise you. We alo caught a glimpse of the great Josie Ho in the Hong-Kong scenes, who I had not realised was in the film.
And his second film out in January, Haywire, about a female black ops super solider out for revenge after being betrayed, with former real life fighting champion Gina Carano in the lead role, kicking the backsides of a whole lot of good actors such as Michael Fassbender and Ewan McGregor. After the trailer, we saw an extended scene of her battering Michael Fassbender who seemed to have deserved it.
As a guilty treat, the whole first sequence of Final Destination 5 was presented, and I can safely say, despite the familiarity, this is the best opening scene of the franchise ever. This time it is set on a collapsing bridge with the victims being despatched in the most innovative and gory ways, with one in particular involving a nasty fall, a boat pole and some spilled innards popping out in full 3D glory that had everybody squeaking in delight. After Fast 5, are we seeing a new trend when the fivequels are surpassing the original?

Among the appearances, Guy Ritchie turned up and seems to be an all round nice bloke, having a few words about the Sherlock Holmes sequel with Noomi Rapace joining in. And Mark Strong came on stage too, confirming that he has possibly the best voice in the industry.
Tomorrow, time for the Conan premiere, plus another surprise screening (rumour has it it could be The Muppets!) so I shall be reporting shortly.
at 01:49