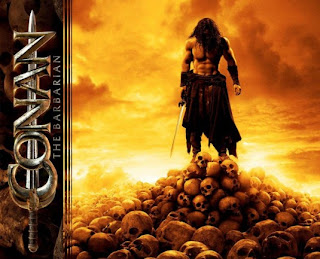 German director Marcus Nispel, mostly known for music videos, has made a speciality of remaking 80's classics. Within the wave of horror remakes of the last decade, his underrated Texas Chainsaw Massacre remake was probably the best of the crop. However he then squandered any expectactions we might have had of him, with the tedious Friday the 13th remake and the nonsensical viking actioner Pathfinders.

He has now tackled yet another iconic 80's classic, Conan the Barbarian. I am a huge fan of 80's heroic fantasy so I was hoping this would start a new wave of sword and sorcery films. There was actually talks of a Red Sonja remake recently, with Rose McGowan but the project got canned. So are our nerdish dreams fulfilled?


The story itself has very little to do with the 1982 film, apart from the premise of a young Cimmerian seeking to avenge the death of his tribe and his father by the hand of an evil warlord.

First of all, the man himself, Conan. He is now played by relative newcomer Jason Momoa (Stargate: Atlantis, Game of Thrones) and is by far the best thing in his film. An impressive physique that still manages to look natural (unlike the steroids-filled Austrian oak), a thunderous voice, and a magnetic presence, he looks and acts perfect for the part. I do not care what anybody else say, Arnold Schwarzenegger is and never was a good actor, and however blasphemous this might sound to some, Jason Momoa is definitely an improvement. And for having seen him on stage at the screening, I can say he looks equally impressive in the flesh. (Except that he wore glasses! Conan does not wear glasses!)

The film starts off really well, with an extended prologue showing a young Conan as quite the warrior already, fearless and taking on a squad of savages and bringing their heads back to his dad, played by Ron Perlman who delivers a short but memorable performance. And with Conan grown up and on the trail of the baddies, we are treated to epic action scene after epic action scene, with some impressive vistas (mostly CGI but impressive nevertheless).

Any fears of a watered down reboot are very quickly dispelled: the film is incredibly violent and loud, possibly the loudest film I have ever seen (so to speak). Not a scene goes without somebody's skull being cracked open, their bones crushed, their limbs hacked... Fierce grunts, flexed muscles, swords deployed...  It is violent, it is dirty, and you will leave the cinema as if your head had been pillaged by a bunch of barbarians. This is a world where men call women "Woman" and have mottos such as: I live, I love, I slay and I am content. Simpler times...

Yet despite all this, this remake never fulfills its early expectations. The fault lies squarely within the script. After this great exposition, and an entertaining first half, the film does not seem to go anywhere because the story is far too simplistic, lacking of any proper developments, and without the scope, emotional involvement and likeable supporting characters of the original. A sidekick/comic relief is introduced (Said Taghmaoui, remember him from La Haine?) but pops in and out of the story for no logical reason. And I am all for stronger female characters, (hell, I would have loved a Grace Jones character just like in Conan the Destroyer), but in here, the love interest, an ethereal, fragile thing, raised in a temple, fights and defeats men about five time her size and this is just ridiculous. At least we have a giant snake. You cannot have a Conan film without a giant snake!

My main criticism however concerns the relative lack of sorcery and the disappointing bad guys. The main baddie, played by Stephan Lang (Avatar), is just lame with that one same expression throughout the film, meant to channel evil, but that makes you want to pass him the pepto bismol. I had high expectations for Rose McGowan as his witch daughter Maurique, and she has an amazing look, as a sort of unlikely daughter of Pete Burns and Freddy Kruger, but she is not given enough magic and killing to to do, apart from raising some CGI sandmen and slaying a couple of virgins, and deserved a much better written part. Watch out for a short scene that acts as a direct reference to the first Nightmare on Elm Street by the way, which might seems incongruous in the context but raised a smile.

And the ending is terribly anti-climatic. All seems to be leading to one hell of a fight in an impressive set, but the baddies are dispatched far too quickly. And what was the point of that sought after magic mask, a McGuffin which leads to nowhere apart from making whoever wears it look like something straight out of The Naked Lunch. I was expecting demons, all hell to break loose, black magic! And one word on the 3D: post-converted. Enough said.

Entertaining but not particularly involving, sadly I doubt this will bring back the expected return of sword and sorcery. Maybe somebody will end up remaking Krull regardless? One can dream! Conan the Barbarian is out on the 19th of August in the US and 24th of August in the UK.