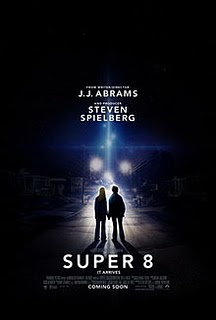 Plot: 1979, Smalltown USA. A group of children is making an amateur zombie movie at night when they witness a catastrophic train crash. Soon after, pets, then people disappear and somebody, or something, seems to be on the loose, with the military doing everything to keep it all hidden.

While still a blockbuster aiming for a wide audience, there is one particular demographic that this film is targeting: anybody in their 30's who grew up watching all the movies that Steven Spielberg directed, produced or even just influenced in the late 70's/early 80's: E.T, Encounters of the third kind, Jaws, Explorers, Gremlins... and even Stand by Me. There was a certain magic to these films, the fantasy, the insight into complicated but ultimately loving family relationships, the friendships, an unseen terror, the childhood naivety and rites of passage... that make people my age say: "They don't make them like this anymore!"


So J.J. Abrams decided to "make one like this" And you could not have found a more faithful tribute if you tried. Super 8 is like a mixture of all the elements of these films blended together, with the small town 1979 setting, complete with the fashion, all the way to the ever present lens flares so typical of this period. Yet, as excited as I had been after the intriguing trailer, Super 8 turned out to be a surprise disappointment.

For all its detailed recreation of the Spielberg universe, the problem I have with it is that it felt all too knowing and self-conscious to be truly convincing, and lacked the real magic these movies had. Sure there is certainly some nostalgia involved and it is easy to forget that those films did not always gather raving reviews at the time, sometimes even dismissed as empty entertainment. But there was an emotional core and an earnest belief in the story that is cruelly missing here.

The children just do not ring true, and feel like artificial recreations of better characters from yesteryear. Their dramatic backstory seem to have simply been implanted because there had to be one. I will never forget the children from The Goonies, yet I have pretty much forgotten about the Super 8 ones already. 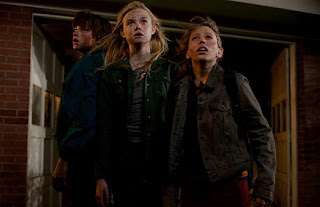 If anything, it reminded me of the shot by shot remake of Psycho by Gus Van Sant, a certainly enjoyable but ultimately pointless exercise. And interestingly, last year saw a much more successful tribute to a very  different type of films of that same era, the surprise critical hit Piranha 3D by Alexandre Aja. While peppered with nods and references to monster and horror movies of the time, and while being a remake, it had still managed to be its own film, something you could hardly say about Super 8.

If anything, it confirms all I thought about J.J. Abrams. There is no denying he is a very competent director, there are a few particularly impressive scenes, such the spectacular train crash, and a gas station under attack by an invisible monster at night that is certainly pushing the limits of the UK 12A certificate. It is refreshing that the adverts and marketing stayed well clear from the "all the good bits are in the trailer" syndrome, keeping the creature and plot developments under wrap. And a film that is attempting at least to put characters in the forefront during a summer of mindless blockbusters should be lauded.

But he is almost too smart for his own good. Just like with his previous films Mission Impossible 3 and the Star Trek reboot, there are some skills at play, but where is the emotion, where is the heart? I seriously doubt that anybody, 30 years down the line, will attempt to make a film inspired by J.J. Abrams because where would you start, where is the personality? And to make thing worse, after a rather tensed and enjoyable third act, the ending is far too rushed and anti-climatic!

Finally, one thing that really bugged me. I find it really hard to believe that kids those ages would have wanted to make a zombie film. This genre was certainly not as popular as it is now after its mid 00's revival, and there is now way, with no internet and video tapes, that they could have seen any of the zombie classics inspiring their amateur film.