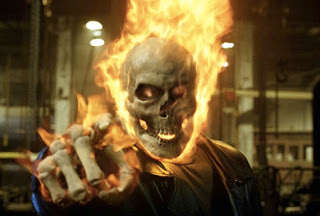 Cage Rage. We all love Cage Rage. I am obviously referring to Nicolas Cage's unique acting style and especially the times when he completely looses it and goes off on one. He is the acting equivalent of a car missing a turn and dropping into a ravine in freefall. With other actors you would call it chewing the scenery, but with him it is so heartfelt that it actually works. His career might have nosedived, he might have had to sell his castle in Germany and be churning out clunkers after clunkers, but there is nobody quite like him and I love him for it. Hell, he is one of the few actors I pay to watch nearly every film, and yes that includes Season of the Witch.

But I digress. Ghost Rider was one of the only few of recent films of his that could be called a hit despite the critical panning, so a sequel was inevitable. The first one was a rather entertaining guilty pleasure, but probably suffered from being a bit too serious, and the CGI Ghost Rider was not just a little bit dodgy.


Now that Mark Neveldine and Brian Taylor are at the helm of the sequel however, one thing you can safely assume is that this will NOT be too serious. These are the directors that had Jason Statham turning into a giant Godzilla like monster fighting a baddie in some drugged up hallucination after all. I have to admit, I am not a fan of the directing duo, who have committed Crank and its sequel as well as Gamer. I am all for some post-grindhouse mindless and over the top trash, but what is missing from their films is a heart, and a softer side, which made such films as Planet Terror endearing in spite of the gore. And without it, all we have left is some rather humourless and unpleasant violence. In fact, the Crank franchise felt like the filmic equivalent of a 90's lad's mag.

This sequel is actually nearly more of a reboot. Despite the good box office returns, the film was not universally loved so this is more of an indirect sequel, with Nicolas Cage thankfully still returning. This first trailer, which I saw on the big screen at BigScreen last week end is rather impressive. The silliness and fun factors have been ramped up, and the style is definitely going in the right direction. It's trashy, it's fun and we are guaranteed more than our required quota of Cage Rage. And the CGI ghost rider head is a lot more convincing, unlike the first film where it looked like it had been added at post production with a crayon.

If there is one slight problem, it is the February release slot. While the original outperformed in a similar release date, there has since been Drive Angry, which flopped earlier this year in February also, and has a very similar tone. I suspect the Ghost Rider 2 producers must have been feeling very nervous ever since.