Horror is the one genre that has suffered from sequelitis more than any other. We have to admit, us, horror fans, that our tolerance level to any kind of trash is very high. And to what depths of mediocrity have we been exposed... Friday the 13th 10, AKA Jason X, in Space! Leprechaun 4, in Da Hood! Leprechaun 5, in Space! Wrong Turn 5! In space? Not quite yet, although I had no idea there was a Wrong Turn 3. Or 4. One franchise is beating them all however, and really is scrapping the bottom of the rusty barrel with dirty nails full of splinters: Hellraiser.


Hellraiser started life as cult horror film in 1987, by first time director and renowned British horror writer Clive Barker. It told the story of hellish creatures called cenobites, unleashed by a demonic cube opening the gates of hell for those seeking extreme pleasure through pain. A sort of metaphor for s&m, it was notable for its gruesome violence and downright depressing tone. It also created one of the most striking and recognisable characters in horror, Pinhead. 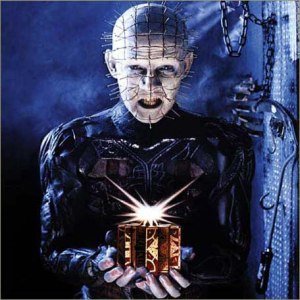 The unexpected success warranted a sequel which, while not quite as successful, was still decent enough, a sort of Aliens type of sequel where everything got bigger and louder , with an all out war with the Cenobites down in hell and featuring some even more disgusting scenes, including one with a scizophrenic man chasing imaginary bugs under his skin with a razor blade (nice!). At least it respected the spirit of the original.

Hellraiser 3 moved the action to America and took the franchise on a downward trend. And then I have vague memories of a Hellraiser 4 in Space involving time travel or something

So it is a surprise to learn that there is a Hellraiser 9 about to be released on dvd. What happened to 5, 6, 7...? A quick glance on IMDB shows that these were the kind of derivative, made for TV utter trash that you would lazily watch late at night while having a pizza.

And despite this, this ninequel has sunk to even deeper lows, deeper than Hell itself. The trailer is absolutely atrocious and not in a good way. It looks like it was made with the budget of the first Paranormal Activity and guess what, it kind of was: $300,000 production cost. I was wondering why they were going with the 90's home video camera cheap image quality until I realised that it was not intentional. The make-up for Pinhead is all wrong. And I am not sure what is going on with the cheap blue light within the hell cube but you can manage better special effects with a run of the mill macbook.

It is lucky that Clive Barker is alive as otherwise he would have come back from the dead to stick needles in the heads of those responsible for this travesty. For now, he has just vocally expressed his discontentment. I truly think there is a time when a franchise has to be put to rest!