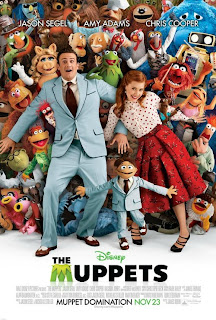 What is the most anticipated film of the next 12 months? Move over The Avengers! The Dark Knight what? The Amazing Spider-who? One film is blowing them all out of the water, The Muppets, of course! What might have sounded like an unlikely project some time ago, the revival of what was thought to be a moribund franchise, has managed to build up some mighty momentum over the last few months. And while waiting for the release which is months away still, we are being treated to more script details and a hilarious video for a reinterpretation of the Muppets theme song.


The best thing about this project is the welcome decision NOT to modernise the beloved characters' appearance in any possible way, keeping them in their old fashioned puppet glory. If you have ever seen the masterful Simpsons episode with Poochy, the dog with an attitude, you will know the pitfalls of trying to upgrade some popular characters and give them a misguided modern "edge". And I just love the way everybody is playing it so straight, as if it was perfectly normal for leads Jason Segel and Amy Adams to find themselves surrounded by the Muppets.

The film is benefiting from an excellent viral marketing campaign that had so far consisted of some absolutely brilliant trailers, hilariously spoofing anything from modern rom-coms to the Green Lantern and The Hangover. And now to add to that, a compilation called Muppets: The Green Album, consisting of current indie rock bands covering some of the most famous tunes of the Henson studios, is just being released. With all of this, Walt Disney studios have so far managed to make The Muppets appear relevant in the frame of today's cinema, while retaining their timeless charm. Below is the video of the Muppets Theme cover from the band OK Go, which put a big smile on my face.

This new film has been co-written by Jason Segel (Knocked Up, Bad Teacher) who also takes the lead, and who, as a big fan of the original TV serie and first movies, has vowed to bring it all back to its roots for this new big screen outing. Sure there are some celebs cameos such as Mila Kunis, Zack Galifianakis, Ricky Gervais, Jack Black etc... but it is in keeping with the TV show's tradition of having celebrity guests every week. And I cannot think of a better co-star than Amy Adams, who has already showed in Enchanted how she can be the perfect embodiment of sweetness without being annoying.

The synopsis also shows a willingness to respect their legacy while integrating some more modern elements. So yet again we will have Muppets having to rescue their studios, as they did in some of their previous films, but not before we see what has happened to them in all these years, as they went their different ways: Fozzie now performs in a casino in Reno, Miss Peggy is a plus size fashion editor at Vogue Paris, Animal is in a Santa Barbara clinic for anger management...

We are still a few months away from their release and I do hope the film finds an audience. By going back to the basics while adding a carefully judged modern twist, it is sure to entice a whole generation who grew up watching them to see them on the big screen, playing with the nostalgia effect in full volume. And perhaps will they find themselves a new and younger audience in the process, one that is in dire need of being distracted from the Chimpmunks and other monstrosities of the same variety.

The film is out on the 23rd of November in the US and we will have to wait until February to see it in the UK.
at 23:57