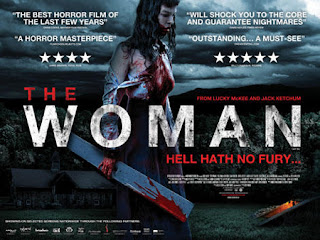 Plot: Under a facade of suburban normality, a family lives under the abusive reign of the father, with his twisted view of what a perfect family should be, and who dispenses mental and physical abuse. While on a hunting trip, he comes across a feral woman and captures her and brings her back home in a bid to civilise and "educate" her, with disastrous consequences.

Review: I have a confession to make. I nearly skipped The Woman at FrightFest. Watching three films back to back before its screening had taken its toll and I knew nothing about it apart from its reputation of ultraviolence. Yet what a fantastic surprise this turned out to be, an electrifying experience from start to finish, that instantly became my favourite film of the year so far. 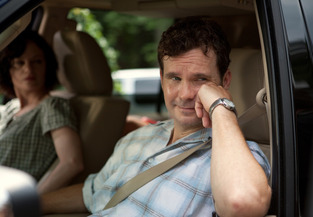 From the very first minutes, it is obvious that director Lucky McKee (May, The Woods) knows exactly what he is doing. No cheap visual gimmickry here, but some bold and confident directing choices, and some unusual sound effects alongside a great indie rock soundtrack, which all contribute to make this unique. Seeing it on a huge screen in a packed cinema, you could almost feel the audience being captivated right from the start.

It is actually hard to label The Woman. It surely is a horror film, but not necessarily in the usual, restrictive meaning of the term. There is almost a Todd Solonz-esque quality to early scenes of a seemingly banal family life hiding a horrific reality. It is scary but not through cheap jumpscares, more thanks to its simmering tension and a carefully orchestrated sense of threat that pervades every scene, even the most mundane ones. Indeed very little violence occurs until the devastating final act, and yet it is all to the credit of the director that we are kept constantly on the edge of our seat throughout, knowing full well that the veneer of normality can implode at any moment.

It is also a lot smarter than so many modern horrors. At its core, the film raises some important issues about woman's oppression, gender politics, as well as what it means to be truly civilised, yet it never feels like it is shoved down our throat. And the surprise is how emotionally involving it becomes. Indeed, this truly is what sets the film apart from so many other horrors. We do truly feel for the characters and it surely is a rarity in the genre.

Of course, the film IS violent There are some truly horrifying scenes in the last act that had me look away a couple of times. Yet it never feels gratuitous and no matter how painful to watch they are, they do feel completely integral to the story. And a few cathartic final scenes leave place to a wonderfully ambiguous ending.

I cannot begin to understand how anybody could accuse the director of mysoginy. After May, The Woods and now this, Lucky McKee is shaping up to be the creator of some great and strong female characters, a Pedro Almodovar of horror as it were. Here we have no less than four great female characters. The mum, the teenage daughter, and her teacher all have some well written and meaty parts to sink their teeth into and thanks to the talent of all the actresses involved, they make the most of it.

But of course the film belongs to PollyAnna McIntosh as The Woman, and her performance is nothing short of extraordinary. Having seen the actress at the Q&A that followed, it was hard to believe it was the same woman we had just seen on screen. She is totally believable as the feral woman of the title, giving her a realistic air of raw animalism, yet her character is a lot more complex than it first appears. She manages to be terrifying while also sympathetic in equal measures, and her ordeal in the hands of her tormentor is all the more difficult to watch. And while the premise might make you think that she is a foe, it quickly becomes clear who you should be rooting for. Pollyanna McIntosh was given a well deserved Best Actress award at FrightFest.

I hope the marketing will not just rely on the shock factor, as tempting as it would be. As extreme as it gets, this is no The Human Centipede or A Serbian Film. And I would love for a wider audience, including some non horror fans, to take a chance and watch it, although I am not holding my breath. (Some douchebag at Sundance took great offence to the film and showed an almost laughable lack of understanding of what the film was all about, if you have some time to waste, watch his reaction below the trailer). As for me, I cannot recommend it enough, a dark and twisted masterpiece that manages the impossible feat of being both terrifying and emotionally affecting.