My Friend From Faro Review 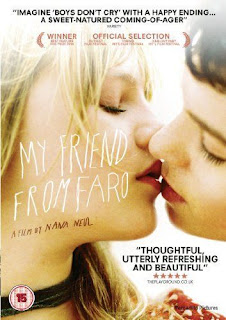 Life is pretty dull for Mel aka Melanie, with her job at the aeroplane food factory, until along comes Nuno. Is he the friend from Faro? Well kind of, but the film starts off a little confusingly and I was starting to think that Mel was into guys, but it turns out she wants to be a guy. Or more specifically a Portuguese guy named Miguel. Sounds interesting doesn't it? My Friend from Faro, came out in 2008, from German director Nana Neul, who also wrote the screenplay.

What she has done is present a fairly believable story of sexual awakening in suburban Germany, with a gentle sensitivity and brilliant camera work. What I liked most about the film is the camera angles, and the bright colours used. Germans seem to have a knack for unfussy shots, and at times I was reminded of the 2005 film, Unveiled, which was set in a similar location and dealt with a similar subject.
Our young butch, Mel, has a close encounter of a head on collision type experience with the beautiful Jenny. This leads to a night out at the local grunge club, and into a web of lies, that has Jenny thinking that Mel is Miguel from Faro. There is a reality to the way in which the teens sneak out and use their fake ID to get into clubs, that many people can probably relate too. What I don't quite buy is the way in which Mel is such a loner, with only her brother for a friend. But then she does seem to be having a love affair with her car. It's a pretty nice car though, and certainly a bit of a chick magnet, that no doubt impresses the innocent Jenny. 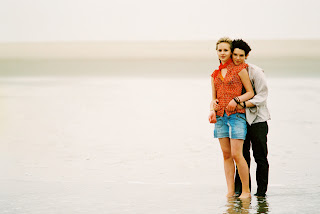 Anjorka Strechel, is intense in her portrayal of Mel. She does an excellent job of showing the frustrations and confusion of coming out. In one scene she dresses in a flowery blouse, and her relief at the end of the night when she changes back to her 'own' clothes is only too evident. Manuel Cortez, is Nuno, the slightly sleazy grifter. He is only too happy to take advantage of Mel, but there is also a charming side to his personality. The other strong performance in the film is from the young Lucie Hollmann. She was only 13 at the time of filming, and had her first on-screen kiss with Strechel.
Despite Jenny's close friendship with her best friend Bianca, she has no idea that she could be anything other than straight, and she is even dating Bianca's older brother. Several twists in the tale lead to an unexpected ending. This is an interesting film that will keep you enthralled.
My Friend From Faro is available on DVD in the UK and has been released by Peccapics