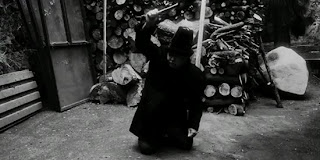 I really wish I was writing about a trailer for a new film by David Lynch. But at the moment, he seems more interesting in saving the world through yogic flights (I am not making this up) than making films, and cinema is all the poorer for it. So any cinematic nuggets that comes from him are still welcome, and we are being treated to a very short film he has made for the Vienna Film Festival, or Viennale, which is taking place next month. And it ranks among the best thing I have seen in months.


It has become a tradition for the Viennale to ask a major filmmaker to shot a trailer every year for the festival. After Agnes Varda and Jean-Luc Godard, this year, it is the turn of the Mulholland Drive director. The title, "The Three R's" is intriguing and makes more sense that you might expect. It is a reference to the educational programme of the same name, based on Reading, wRiting and aRithmetics, and there is some sort of classroom based teaching taking place in this trailer. I am actually wondering if it is also a reference to the Double R diner in Twin Peaks or whether it is just a coincidence.


The visuals are as inventive and memorable as anything he has done. It brings in echoes of his more experimental work, from Eraserhead to Inland Empire. He also seems to have find some inspiration with French surrealism, especially L'age d'Or by Luis Bunuel.

The opening scene with scary eyes man and the buzzing sound completely creeped me out. And as usual with Lynch, it is not just the striking imagery which is memorable, but the sound design, especially the "Man hits the ground with a hammer that makes some scary toy duck sound" bit.

After seeing such brilliance, it makes me even sadder that he has no film in the pipeline. What will it take for David Lynch to go back to cinema? Being hit on the head with the squeaking toy duck hammer?
at 14:41