The Muppets: The Pig With The Froggy Tattoo 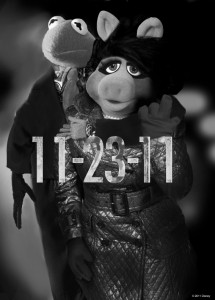 It is becoming more and more obvious that the Muppets new film is shaping up to be the most important cultural phenomenon of the year. And no matter how the actual film turns out, its marketing will remain like one of the best in the history of cinema.


After a brilliant first trailer that started off as a lame derivative rom-com, only to reveal its true (green) colour and characters half-way through, a second one was released that spoofed Green Lantern (and managed to be better than the actual Ryan Reynolds flop). We then got treated to a surprisingly good album of Muppets songs, reimagined by a whole bunch of modern bands.

As the US release date is now fast approaching, Disney has outdone itself however and released their best spoof trailer to date. Try to think of a film that would be the furthest away from the Muppets world: The Girl With The Dragon Tattoo, which became The Pig With The Froggy Tattoo!

And the best thing is, it actually works! This new trailer manages to mix the sharp editing of the one from the David Fincher remake, complete with the slightly darkened photography, the Trent Reznor'esque soundtrack, and even some scenes of violence (is that a Muppet electrocution we see?) while mixing them with some comedy and musical scenes. Oh and is it a Wall-E/C-3PO wannabe we see in the car with them?

They have even recreated the already iconic black of white poster except for one detail: mercifully, we have been spared the view of Miss Piggy's tattooed nipple! The Muppets is out for Thanksgiving in the US and in February in the UK.