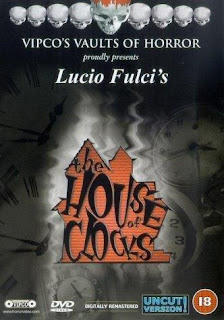 Plot: A trio of opportunistic hoodlums plans to rob an isolated house, inhabited by a seemingly frail and old couple. The nights turns into a nightmare when the inhabitants reveal their true, murderous colours and the time shifting powers of their magical clocks are unleashed...

I have to confess, despite being a true horror fan, I had not seen a single film by Italian master Lucio Fulci until now. The man responsible for The Beyond and The City of the Living Dead among other classics, has a reputation for ultra-violence, and a certain blend of surrealism (a few iconic scenes from his films include death by a big wooden splinter shoved in the eye and a zombie punching a real shark). So I decided to fill my cultural gap and tackle his work by the back door (so to speak), by picking probably one of his lesser known film, The House of Clocks. This was initially made for the Italian TV in the late 80's, but deemed too violent and released in cinemas instead. 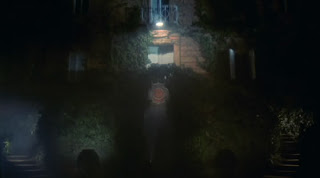 They are some who will switch off within minutes of watching this. The 80's Italian tv movie esthetics are less than pleasing for the eye (the cinematography is particularly hideous especially when indoors, although the DP does manage a few interesting shots involving a dreamy soft focus when outside), and the (dubbed) Italian cast is so atrocious, they would sound dubbed no matter what language they spoke, even their mother tongue. The young actors overact, the old couple is wooden, everybody seems to be wondering what emotion they are supposed to be expressing.

And yet this is an oddity that has a certain charm going for it. The story is rather original and unpredictable (think Funny Games meets Alice in Wonderland) and I would go as far as saying there is a certain surreal poetry to the randomness of it all. Less charitable viewers might complain that the randomness is due to the story basically making no sense whatsoever. It does get more and more absurd at time goes by, and by the time the ending comes (an ending with a certain poetic justice to it), no questions are answered at all. 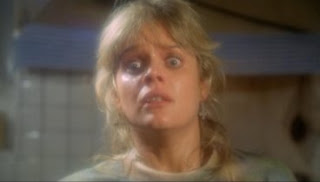 There is also the small matter of not having any characters to root for. The youngsters who plan on robbing the old couple certainly deserves no sympathy, neither does the old couple itself who thinks nothing of shoving a big wooden spike in their maid's groin when she has the audacity to express the desire to leave. The only thing I felt any sympathy for is the cat in the bag (animal lovers should stay well clear).

The film is not particularly violent compared to other films from the Italian director I suspect, yet it certainly pushes the boundaries of the sort of violence I would expect to see depicted on the small screen, which explains why it was never actually shown on TV. Interestingly this was produced by Silvio Berlusconi. Imagine if Nicolas Sarkozy had produced Jean Rollin in his youth, or David Cameron a Hammer film! 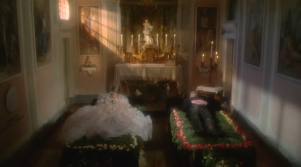 The one aspect that truly stood out however is the dreamy atmosphere. I have often found that any attempt to portray dreams on screen is usually laughable bad and widely off the mark. And while technically none of the characters are actually dreaming (or are they?), the whole second half of the film evoke the characteristics of a dream rather faithfully without the need for stereotyped smoke effects and cheesy sets: the weird impression of time being elastic, the sudden time shifts, the hopeless feeling of running away from danger without ever going fast enough...

I would recommend it as an oddity, although I would be interested to read what Fulci's specialists make of this one. I was planning on embedding the trailer but it is nearly five minutes long and ruins most of the film plot!
at 22:35