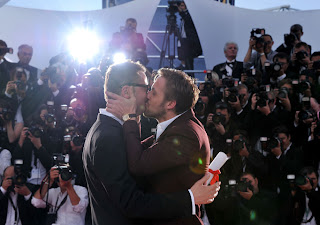 A strange phenomenon is taking place with straight men recently. They are declaring their undying love for a short man who wears a yellow nylon jacket with a scorpion stitching at the back. A man of impossible cool, of few words, with can dispense passionate kisses as well as unspeakable violence at the drop of a hat. This man is Ryan Gosling in Drive. How do you explain this? After all, the screens are filled with metrosexual hunks, yet they do not command the same kind of orientation crossing adoration? 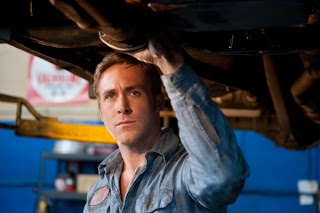 The catalysis for that phenomenon is indeed the film Drive. In it, he is not just any well groomed and attractive man. There is more to him: the impossibly cool attitude, the raw masculinity, the intensity... We are not talking Gerard Butler and the designer biceps, we are talking about a real man. He makes straight men feel like they could go down the roughest truckdriver joint for a few beers together without being called names. Yet at the same time, their 10% of feminine side is accutely aware that, in the face of danger, Ryan would be able to protect them, drive them away from problems or smash the head of any thug to the pulp. They want to be him, they want to be with him... All very confusing.
Whether in reality they would be prepared to explore some unchartered parts of his body with their tongue is another story. There was a bit of shyness at first, but now a whole colony of straight men are declaring how they would go “gay for Gosling”, like lemmings ready to trip over the edge of sexual confusion. Look for yourself if you do not believe me, do a search on Twitter for the hashtag #gayforGosling”...
And the man himself is not averse to a bit of, how to put it, close male contact. Obviously I am not suggesting that his sexuality is ever in question, far from it. But recently he has been living a sort of bromance with Drive director Nicolas Winding Refn, whose intensity would put most newly wed couples to shame. 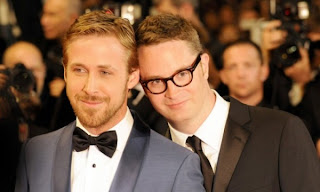 You could indeed write a bromantic bromedy about the relationship between the director and his star. And in a case of When Harry met Harry, it nearly did not happen: Nicolas was so off his face on painkillers and lumped with a bad cold that he hardly spoke on their first dinner date. Yet later that night, something magical happened. When it became obvious that oral communication was not going to work, they ended up driving around Los Angeles all night long, listening to 80's electro pop. And then the Danish director sang along. Everything that needed to be told was expressed. I am not making this up, both men have gleefully described their first meet over and over again on interviews. 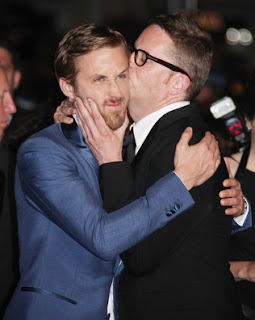 From then on, the relationship blossomed. Paving the way for a new sort of filmic/civil partnership, there has been talks of a long term cinema relationship, with several projects in the pipeline (including a Logan's run remake, whose sole existence is most obviously due to Nicolas wanting to see Ryan Gosling in a tight futuristic spandex outfit). And they are not afraid to show their undying love: at the Cannes Film Festival, for the photo call after the Nicolas Winding Refn picked up a best director gong, the passion and excitement got a little too much and Ryan Gosling planted a huge kiss on his director, with not the slightest concern for all the eyes of the world media upon them.


Maybe one day somebody will make a film about those two... Driveback Mountain? In a few days, I shall write a post about Michael Fassbender, another bromance icon... I shall call it: Going #BenderForFassbender
at 22:46