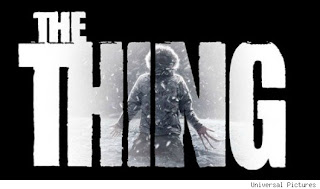 A few months ago, a first trailer was released for the Thing's prequel that was not all that promising to say the least. As my favourite horror film of all times, it is a understatement to say that I was not looking forward to this prequel raping the memories of the John Carpenter's version. Yet a new red band trailer has been released and it has increased my interest tenfold!


It still remains to be seen how the film will link up with the original. And if they take it to its logical conclusion, (SPOILERS), nobody makes it alive at the end of this one. Please do not give us some shot of Mary Elizabeth Winstead escaping on a helicopter or something, I say they ALL die or it's a cop out.

So what is different in this new trailer? Well the special effects for one. The John Carpenter film remains a landmark for its truly terrifying and absolutely incredible animatronic special effects by master Rob Bottin. The spider head, the expanding neck, the head that turns into a carnivorous plant and chomps another guy's head... The stuff of nightmares!

I did read a short interview from the special effect designer of this new film claiming they had tried to remain faithful the original's style, with as much "physical" effects as possible. And this trailer seems to confirm it, with some impressive looking effects that are direct references to the 80's version: the spider head here becomes a spider arm, and bodies expand and get deformed in a gruesome fashion. There is even a scene that shows how the iconic split face of the original came to be.

Lost however is the slow pace of the original and it is a real shame, but I guess Universal felt the need to market it as an action/horror and the audience does not have the patience it once had.