Scream 4 review: Best one since the first 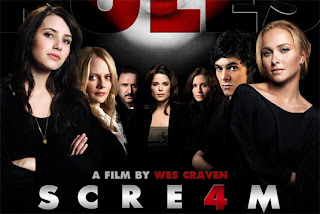 I had to admit I had some very low expectations for this one, which helped enjoy it ultimately. Especially when Wes Craven pretty much publicly disowned it (see previous post on the subject), when Ehren Krueger (from Scream 3) took over scriptwriting duties from original creator Kevin Williamson halfway through the production. And I was worried about the whole updating to the 2010's thing, which promised some tiresome twitter/facebook/youtube name check.
Yet after the very amusing prologue with a couple of great cameos (I won't spoilt them!), what I thought was just going to be at first a competent but unremarkable and probably unnecessary sequel, turned out to be a very pleasant surprise, which I am not afraid to say it, is on par with the original as far as I am concerned, especially thanks to a great third act that reserved a few surprises.

You do get the feeling that Wes Craven took this seriously, and he has managed to craft some very effective scares. Of course it is all in the "silence followed by loud noise" variety, which has been done a million times before, but it still works, and the new Scream is also a pacier experience. One of the weakness of the original trilogy was the lack of gore and this has certainly been addressed, with more murders and more bloody mayhem (hell you even get to see some guts spilling out of a body!) without descending into Saw territory either.
As much it has a almost become a swear word, bored that we all are with post-modernism in pop culture, I did actually find the script to be "smart". The much dreaded update to the 2010's of Twitter, i-phone and facebook was actually cleverly done, and the ending was a very relevant mirror to the times we live in (I cannot expend on that without spoiling the it!) 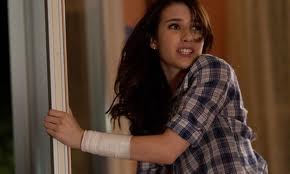 Of course there are a few flaws. By upping the numbers and getting straight into the action, the film does not quite give enough time to all its characters unlike what the original did. Neve Campbell's character is just too unidimensional, with her underwritten part that gives her little more to play than the eternal victim. Even Courtney Cox's character, Gayle Weather, who is given some killer lines and a kick ass attitude at first, takes a back seat as the film goes on.
And while the first three had fun with the concept of playing with the rules of a horror movie, then of sequels and finally trilogies, the whole "New decade, new rules" idea is all over the place and just does not work. We are never really properly explained what these new rules are supposed to be, and have few examples of threequels/reboots to compare them to. If anything, had we really followed the rules of the threequels, this should have been set in space, just like Leprechaun 4 (in space!), Hellraiser 4 (in space!), Jason X(in space, although fair enought that was actually number 10!). 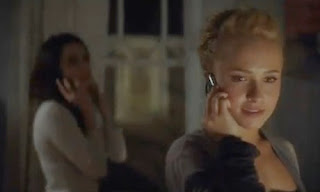 But that did not spoil my enjoyment. The new cast, even if most of them are early Ghostface fodder, manage to shine through (especially the sassy Hayden Panettiere from Heroes) and there is never a dull moment. Sure it might not be particularly original, but then again, compared to the wave of woeful slashers of the last decade, this has got to rank as one of the best! I particularly recommend watching it in the biggest screen you can find, with a full audience of adoring fans as I did, for a fuller experience.
Given its lacklustre opening week end ($19m) it is unlikely we will get to see a fifth one, plus I truly do not know where they can go from there. It might not have been enough to kick start a new trilogy, but it is most definitely a more fitting conclusion to the franchise than Scream 3.