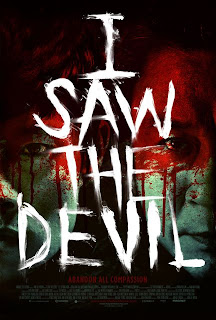 I had been waiting for Jee-woon Kim (Tale of two sisters) new film, I saw the devil, for quite some time, as per my previous post. And having seen it, I can't help feeling a little bit disappointed. This new offering follows a young inspector driven mad by the murder of his pregnant fiancee by a mass murderer (played by Min-Sik Choi from Old Boy). Having found his trail, he goes on a dangerous game of cat and mouse, inflicting as much pain as possible on the murderer, before letting him go, only to catch up with him again and committing increasingly brutal acts of violence on him.

As for any South Korean film lately, is it very competently made: beautifully shot, mostly in atmospheric snowy back roads at night, expertly acted, and with a tight script that makes the 2h20 running time goes like a breeze. It is impossible however not to compare this tale of brutal violence to the vengeance trilogy of Park-Chan Wook (Sympathy for Mr Vengeance, Oldboy and Lady Vengeance) and unfortunately, it does not work on this new film's favour. 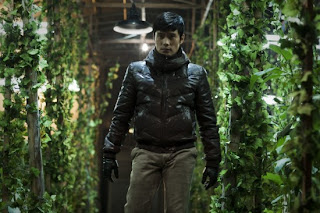 One of the problems I had with this film is that it does feel like we have been there before. There is just as many tales of bloody revenge we can take before it starts getting a little old, especially when it has done so well before. As for the theme of the hunter becoming what he hates the most on his quest for revenge, blurring the line between right and wrong, again, we have been here before in so many run of the mill Hollywood thrillers (see the recent and awful Law abiding citizen)
Another issue is that I could not really connect with the lead character. As sorry as you felt for his loss, he just became a blood thirsty, unidimensional vigilante far too quickly, after his first encounter with the killer, and there was not much development after that. 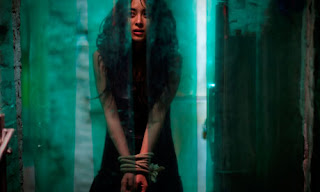 The violence is extreme, messy, and realistic. The two protagonists fight with anything that they can get their hands on, screwdrivers, fire extinguishers, shotguns... This is not an over the top violence played for the laughs, it is painful and visceral. Similarly, the portrayal of the mass murderer defies all Hollywood stereotypes. This man is not a brilliant but deranged mind, he does not taunt and play with the police as part of his brilliant scheme. He is just a monster with absolutely no redeeming features, and no explanations for what he does, bar a deeply hatred for women and humanity in general.
I have to point out that as preferable as I feel realistic violence can be when it comes grounded with moral issues, as opposed to mindless and sadistic one, I still felt rather uncomfortable at some scenes depicting violence towards women, which verged on the unpleasant on a couple of occasions. I appreciate the whole point of this was to show how all the nastiness of the killer, but all is a question of choice when you are directing and I do wonder if some of them were truly necessary. 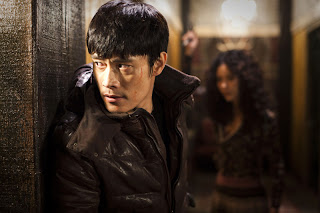 One thing that South Korean cinema seem to be expert at is great ending and this film does not disappoint in that respect, a nasty and incredibly dark ending, just as you thought there was nothing else the hunter could do to get even with his prey.
Compared to waves after of waves of average American thrillers, this is definitely several notches above them. But compared to the high standards and fireworks the South Korean cinema has displayed recently, this is a bit of a let down.