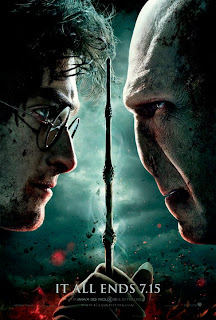 Over the last few days I have been wondering why many films websites I came across were featuring the poster for Enemy mine. Until I realised that it was actually the poster for Harry Potter: The deathly hollows part 2. Enemy mine was a sci fi 80's film with Dennis Quaid and Louis Gosset Jr, about a man and an alien from an enemy race having to team up to survive on a hostile planet. The film was a big flop at the box office due its emphasis on characterisation over special effects, yet became a cult classic of sort. 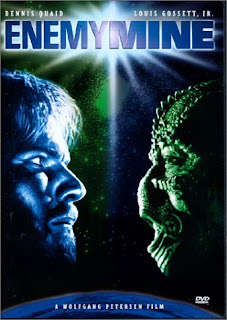 I have put both so see for yourself. The whole face to face close up is a real throwback to 80's posters to begin with. But what really made me think about Enemy Mine is the fact the Voldermort's face looks suspiciously like the reptilian alien.
I'm not sure what kind of vibe they are trying to get with this poster but it absolutely does not work in the context of a family fantasy.