Glastonbury The Movie In Flashback Review 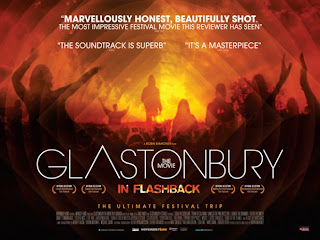 Glastonbury the Movie first released in 1996 is now enjoying a re-release under the more cumbersome title of Glastonbury the Movie in Flashback. Filmed over the three days, Friday to Sunday of the 1995Glastonbury Music Festival the five credited directors take snap shots of the festival and focus on a handful of festival goers. 1995 was the hottest Glastonbury on record and the lack of the traditional Glastonbury mud andWellingtons attests to that sunny summer in Somerset.


The documentary or Rockomentary, Glastonbury the Movie is a nice stroll down memory lane or for those of us too young to have been there, an interesting capturing of alternative culture in the mid 1990s. The film makers have tried to include the full spectrum of the festival: From camping, to food, to the rudimentary toilet facilities, people dancing, couples, singles, groups and parents with their young children, drinking and the drug culture of the time and of course the music of the era. To personalise the experience the documentary follows a young bandana wearing Dexter Fletcher and his musician friends along with Girl in a Pink Dress and a Brown Haired Girl. This helps to provide a sense of narrative amongst the plethora of short scenes included in the film.

For the first thirty minutes of the 95 minutes are enjoyable though the film look and quality more suited to the small screen than the cinema. However Glastonbury the Movie lasts for another hour and the nostalgia begins to wear quite thin. In a comfortable cinema seat without drink or drugs in the system, the documentary becomes akin to being the one sober and non-stoned responsible driver at a party when it is 3am and you, the driver needs to be at work for 9am. Bras were worn in the 1990s and yet the film makers have followed a tendency to film women not wearing them. Remarkably for a Music Festival and perhaps due to contractual restrictions, there is very little music from the big bands of the era. Yes The Verve are featured and there is a wonderful moment with the Stereo MCs, but the absence of big named bands from that year is noticed. The documentary glorifies the E drug culture of the time which one may or may not agree with.

As with many group experiences, it is very difficult to quantify or capture the atmosphere or ‘vibe’ of that experience unless one was actually there. Also there are sequences in the documentary that very much verge on the suspiciously staged with the (braless) dancing Brown Haired Girl and modelesque movements of the Girl in a Pink Dress. Though certainly with interesting moments that will raise nostalgic smiles, Glastonbury the Movie in Flashback might well be more suited to a DVD release for a rainy Sunday afternoon.