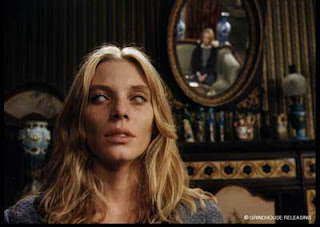 The Beyond is yet one another of those 80's classics which I discovered on the late, thanks to Lovefilm, whose role in spreading cinephilia among Britain is not to be underestimated. This film, by Italian horror master Lucio Fulci, was recommended to me by Sam Inglis from 24FPS, who has become my most trusted source of recommendations for horror films. If you do not follow his website, well you should. In The Beyond, a woman from New-York inherits a hotel in New Orleans. Little does she know that the hotel was built over one of the gates of hell.

This is a low budget, 80's Italian/American co-production, and at such, some might be put off by its perceived limitations (minuscule budget, nonsensical plot, and approximative acting) yet this is part of what gives it some of its charm. Makes no mistake however, this is no "so bad it's good" type of film, this is a proper, old school horror. The gore is relentless and so grubby, it made me want to have a shower after watching it.

There is an infamous scene in particular (skip to the next paragraph if you prefer to avoid a spoiler), in which a man, paralysed after falling off a ladder, has its face eaten by spiders coming out of nowhere. And no such thing as the frenetic, quick editing we are accustomed to nowadays, Lucio Fulci makes each shot linger, with the spiders slowly taking bites out of the victim's eyes, lips, nose... This is absolutely horrific!

The director spares none of our sensibilities, with the fate reserved to a young girl throughout the film being particularly gruesome, in a way that would certainly be not allowed in a modern film, certainly not a studio one anyway!

Some have lamented that the story makes no sense, but again, it is the randomness of some of the scenes that gives The Beyond its darkly poetic side, alongside its striking imagery. The pace is slightly uneven for a good chunk of it but the Italian director more than makes up for it with an intense third act and a fantastically bleak ending, that remains one of my favourites of all times. Seldom has a film conveyed such a pervasive air of hopelessness as evil is inexorably spreading. 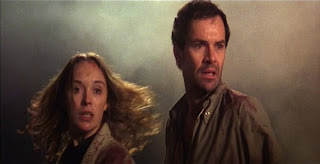 I have only seen this recently but such was the impact it had on me that I am confident it will remain on my list of top 20 in the foreseeable future, as one of the most surreal and impressive horror films ever made.

In our Top 20 challenge, Martyn Conterio, who is publishing his list daily the same way as I do, had Chris Marker's La Jetee at number 19. This is supposed to be an influential sci-fi masterpiece which I have shamefully never seen but I intend to remedy on that! And again, some wildly different lists are shaping up. I wonder if we will end up with one film in common at least? You can read his post on La Jetee here.

In tomorrow's film, Christmas will come early with a very naughty French Santa Claus (I said French, so I am obviously not talking about Bad Santa!)