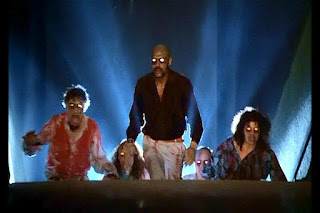 Does Demons really deserve to be so high in the list? Is it any better than Citizen Kane, The Godather and Sunrise? Yes to the former, no to the latter, of course not. But it is the list of my favourite films, not the best films ever made, and taking into account the joy this wonderful piece of 80's Italian gore brought me, it deserves its spot!

In Demons, a random selection of people find themselves invited to a surprise screening in a cinema. The film shown turns out to be a horror featuring demons and an evil mask, the same mask that a member of the audience had scratched herself with in the foyer before the performance started, and that makes her turn into a demon herself. Soon the horror depicted on screen spills into reality, as the demon infection spread, and what is left of the audience, locked in the cinema, fights for survival...

So Demons does not have the social subplot of the Romero's Dead trilogy. But then Dawn of the Dead does not have a a character rides a bike in a cinema, sword in hand, hacking demons' limbs while Fast as a Shark by metal band Attack is playing in the background. 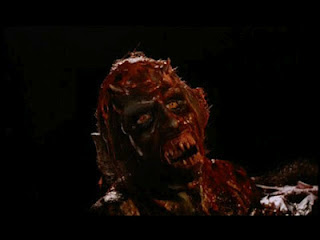 This is proper, cheesy, 80's tastic, schlocky horror, an antidote to the absurd wave of toothless, CGI heavy "horrors" that the 2000's brought upon us, a serie of films which mysteriously all had a $20M opening week-end. Spooky. There is no depth to Demons but there is carnage and mayhem, and plenty of it. The gore, once it gets started, is relentless and horrific, what with the eye gouging, teeth bursting, scalp pulling... with a couple of scenes that had me look away!

And as much as I love zombies, demons make a nice change of monsters, allowing for some rather fantastic prosthetic effects, all in green skin, yellow eyes and sharpened teeth and claws, which I find rather scary still now.

This is a film that is actually blurring the line of the so good it's bad as far as I'm concerned. Of course, the acting is atrocious (with an international cast who are badly dubbed by actors with little grasp of the English language), the story has more plotholes than Prometheus, and the whole thing looks incredibly dated and naff. Yet I refuse to call this a bad film you would watch merely to laugh at. A few scenes are genuinely scary and disturbing and whole thing is gloriously over the top and entertaining. And the gory mayhem is sight to behold, drowned under a pounding 80's heavy-metal soundtrack. 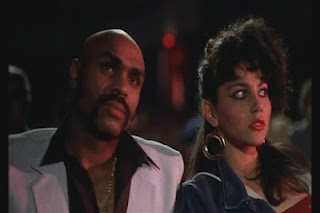 Talking about the story, I just love the way so many plot elements do not make any sense at all, and so many questions are left unanswered (why did the usherette look so evil if she turns out to be an innocent victim, who was the man with the mask who started it all?).

Interestingly, it is also one of the first examples of meta-horror, with the Spanish horror Angusta using a similar "film-within-a-film set in a cinema" plot device a couple of years later.

The film was followed by a really disappointing sequel that was surprisingly low in gore, but had at least one really funny scene which saw a bunch of demons in a car park all do a salto jump over a fire blocking their way. 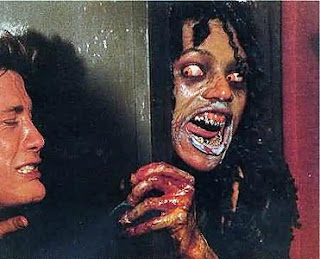 I recently saw a film which, to me, almost came across as an unofficial threequel, or reimagining rather, of Demons. It is called The Convent, with the wonderful Adrienne Barbeau (The Fog) who still kicks ass at 60+ with a leather jacket and a shotgun. The film is set in a, well, convent, not a cinema, but it is a similar tale of a group of people being stalked, killed and possessed by a bunch of demons. It is almost as if it is replacing 80's naffness with 00's one. Gone are the neon lights and eurotrashy metal rock, in are the dayglo and eurotrashy techno. A must see for Demons' fans.

In our interblogs top 20 films challenge, Martyn Conterio at Cinemart picked Metropolis yesterday. You can read his post here.

So we will be taking a break this week-end yet again, and we will be back on Monday with number 11 of my list, a film which features an 80's hairdo so big, it bends space and time.