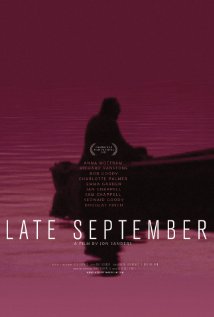 Filmed over the course of 24 hours in a Kent house and garden, Late September focuses on a group of long term friends, most in their mid 60s celebrating the 65th birthday of Ken (Richard Vanstone) who has been married to Gillian (Anna Mottram) for nearly 40 years. With a small collection of friends staying in the house, it becomes clear that Ken and Gillian’s marriage is no longer a happy one and long term friendship strengths and weaknesses within the group are explored.

From the films press release, director Jon Sanders believes that the miniscule budget and having the actors improvise all of their lines is a virtue within the film. It might well make for an interesting experimental approach but the practical outcome of this form of film making as seen in Late September makes for a shockingly poor, substandard film. The single camera used seems to have been a cheap borrowed camcorder and with only 32 camera set ups one would hope that the standard of acting would distract from the non existing talent being displayed behind the camera.

Without knowing that the actors are improvising, each scene just seems like a group of amateur actors, some slightly more talented than others, playing around with lines for a student film that could easily be filed under the category of ‘amateur hour gone wrong.’ The audience are frequently shown poor quality long shots of garden foliage which appear to be a symbol of depth within the film but really hint at the lack of any sense of editing or script ideas for Late September. The improvised dialogue doesn’t offer up a lot of sense with one post-coital boat sex scene being so frustratingly badly acted by actors attempting to emote whilst make up their lines, that it is verging on being so bad it’s almost good. 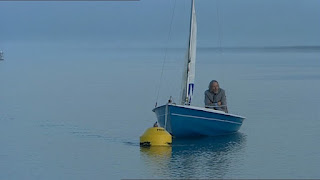 Most of the characters are just unpleasant and there is little to empathise with as the main couple bickers or others fall apart in front of our eyes.  Some of the actors seem so nervous about trying to improvise against the clock that any sense of these being real long term relationships evaporates within moments. True the film is set within a party, but the actors seem to be stealing themselves against the experience by consuming the copious amounts of alcohol on set.

The film’s music is mostly from live piano performances by composer Douglas Finch who is an unspeaking character playing the new boyfriend to one of the group. Again, this makes for an interesting approach to including music in a film but the horrendous sound quality and lack of professional sound editing just causes the piano to sound tinny and irritating at times.

The topic of people being or trying to stay within unhappy relationships might well make for an absorbing film. The concept of what it is to change and age within a relationship would also have the potential for an interesting scripted film. But Late September most certainly is not such a film. Amazingly it is due to open at the ICA and in selected cinemas nationwide in June. FilmLandEmpire’s advice would be to save your money and just install a CCTV camera in the kitchen of an unhappy divorcing couple that you know and watch that instead.