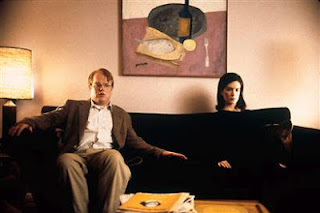 Our interblog films challenge, alongside Cinemart, continues. And now at number 13, a film that delivers none of what its title promise: Happiness. I mean, no happiness for the characters, because it is guaranteed to make the viewers happy. A little sick, terribly disturbed also, but very happy. Or maybe outraged. And not particularly happy after all.

In Happiness, a gallery of characters in New Jersey struggles to find happiness, gravitating around three sisters: Joy (Jane Adams), who while still living in her parent's basement is pursuing a musical career going precisely nowhere and embarks in a disastrous relationship with a married cab driver. Helen (Lara Flynn Boyle), a successful writer, lives a life of glamourous parties yet feels strangely unfulfilled. Trish (Cynthia Stevenson), a housewife, lives in a domestic dream, blissfully unaware of the dark secret of her husband Bill (Dylan Baker).


It is a little sad that, like many other directors on this list, Todd Solondz has never reached the dizzying heights of career best Happiness in his subsequent films. And it was all the more painfully obvious in Happiness' sequel, Life During Wartime, despite its intriguing concept of having a whole new bunch of actors play the existing characters. It was flat, underwritten and unexciting, more of an unnecessary footnote.

It is an understatement that the Happiness was a huge shock when I first saw it at the cinemas. Seldom have I heard so many loud gaps among the audience, since a lot of it is so uncomfortably yet hilariously dark and shocking. 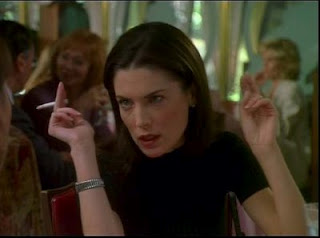 In this film, the Welcome to the Dollhouse director perfected an unique style, having his characters all adopt a very unusual delivery, slightly elongating their lines, with a surprised, "deer caught in the headlights of life" type of look.

Some of his characters might be a bit ridiculous, grotesque even, but he has a lot of understanding for them. While you can tell he is rooting for the "losers" of life, even the successful Helen is presented in a way that almost eludes some sympathy, for all of her aloofness, in her quest to find a man who can finally fulfill her. He reserves his biggest scorn for what is seemingly the most "normal" of his characters however, Trish, the soccer mum. She is all smiles and lives in an immaculate house with the perfect family, yet she turns out to be possibly the biggest monsters of them all, with scant empathy for anybody who does not match her views of what is acceptable, and for all her big talks of moral, has no qualms asking her husband shrink to tape his patients for her.

Much was said at the time of the film's released of the director's perceived cynicism. But Todd Solondz is not as much cynical as hyper sensitive. His film is a big slap in the face of any aspirational drivel we are subjected to. He states that some people are just plain unlucky and will never find happiness, there is no point kidding ourselves about it. It is those who are emphatic to the suffering of others, to the injustice of society, who force us to stare into the misery of the world, using dark humour as a coping mechanism, whereas the Trishes of this world are completely blind to it all.

I am a bit nervous writing about one of the characters, Bill, given some of the stringent codes of conduct of blogger and the fact that anybody can report your site if they do not like what they read, so I will not use the word that defines him. But suffice to say Dylan Baker gives a career-best performance, and features in one of the most devastating and uncomfortable scenes ever committed to the screen.

Martyn Conterio at Cinemart picked Taxi Driver as his number 14 yesterday, the Martin Scorsese classic I only ever saw once, years and years ago, and I now feel the need to revisit it. You can read his post here.

In tomorrow's film, it will be claws against sabres.