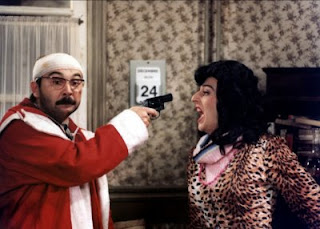 At number 17, a comedy at last, Le Père Noel Est Une Ordure, whose title can be translated as Santa Claus Is A Jerk. Given the French cinema's influence and reach around the world, it is somehow surprising that its most popular and famous comedy within its borders is so little known outside of it. The film takes place over Christmas Eve (France celebrates Christmas on its eve, not the actual day!), as we follow the staff of helpline "SOS Amitie", assisting severely depressed and lonely people, a sort of French good samaritans organisation. As the evening progresses, they face some increasingly desperate callers as well as visits from a gallery of bizarre and over the top characters, with the night turning into complete chaos and madness.

Adapted from a popular play (and with significant changes to its last act), this film is quite simply the funniest I have ever seen. It is incredibly dark and hilariously ferocious, taking aim at the season of goodwill and lampooning the spirit of Christmas and its enforced happiness, but never falling into the trap of pointless cynicism. Its characters are outrageous, ridiculous sometimes, but the director Jean-Marie Poiré never looks down on them, no matter what their quirks are, and as such, it reminds me of the cinema of Todd Solondz, as if the American director ever decided to do a slapstick comedy.

The main reason why Le Père Noel Est Une Ordure has never quite made an impact outside France is that a lot of its dialogue is positively untranslatable, especially because of its combination of puns and visual jokes in some scenes. There is just no way anybody can translate the following line and make it work alongside the gesture that the character makes : "Je ne vous jette pas la pierre, Pierre mais j'etais a deux doigts de m'agacer!" I enclose a clip, which will mean nothing to non-French speakers.

I totally appreciate that the same could be said about plenty of comedies in the English language, such as the Monty Python films and others yet translators have somehow always managed to rise to the challenge. It is worth noting that an American remake exists, called Mixed Nuts, with Steve Martin and Juliette Lewis, which transposed the action to Los Angeles... It sank without a trace and the less said about it, the better!

The original French version is also very refreshing in the way it manages to be very un-PC towards its characters, in particular a rather rubbish transvestite called Katia, gently poking fun at her, but not sparing her as if we were just not allowed to laugh at her in the same way as all the others.


So the film is not perfect, and after a hour of comedy fireworks and endlessly quotable lines, it looses some its steam, all the way to a rather anti-climatic ending. Yet, as heartbreaking as it was, I decided to put this one above some other of my favourite comedies such as Airplane and The Naked Gun. While I have seen those well over 20 times, probably more, I have been watching Le Père Noel Est Une Ordure so many times ever since I was a kid and never grow tired of it. Not that I feel that there was only space for one comedy on this list, far from it, but other titles were fighting for a spot also and won.

Le Père Noel Est Une Ordure is a film that EVERYBODY in France has seen and loves, it is endlessly repeated on TV and any French person you ask about it will be able to quote you some of its lines. Just ask them about the "doubitchous"...

A famous writer, whose name I cannot remember, was said to have learned French solely so that he could read Marcel Proust's books in their original version. Should you be learning French so that you can fully appreciate Le Pere Noel Est Une Ordure? Yes, you should.

Over at Cinemart, Martyn Conterio picked The Fearless Vampire Killers for its number 18 and finally a film I have seen, making me feel a little less inadequate all of the sudden. It is also a brilliant choice, one of the funniest films ever made. You can read his post here.

We will be taking a break on week-ends for this challenge, so join me on Monday for film #16! You like strippers? You like puzzles? You will be in strippers puzzles heaven!

For a recap of my entries so far, read the end of this post.