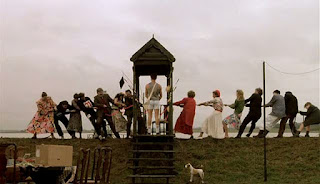 Yet another film that I nearly forgot, and how could I? Aptly finding its place in a list given its mathematical theme, Drowning By Numbers at #15. The cinema of Peter Greenaway might be an acquired taste but it is one that I acquired at a very early age.

In Drowning By Numbers, three women of the same family drown their respective boy-friends/husbands in a bathtub, a swimming pool and at sea, enrolling a duplicitous coroner to cover their tracks. As the story unfolds, the screen is filled with visual and mathematical clues.


When I was growing up in France, I was fascinated by Great Britain, but not the one seen in Richard Curtis' world full of "loveable" toffs who swear a lot. Rather, to me it seemed like the country of the bizarre and the surreal, filled with eccentric characters, and a healthy disregard for logic, what with Alice In Wonderland and The Avengers. 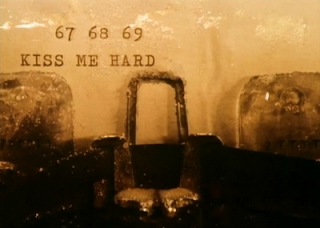 And watching films by Peter Greenaway confirmed my opinion. It is an understatement to say that the career of the experimental British director has been hit & miss. There have been so many highs (The Belly Of The Architect, The Cook, The Thief, His Wife And Her Lover, The Pillow Book) but also a few execrable lows (8 1/2 Women, Prospero's Books). And there are many who dismiss his films, even his best ones, as being all style and no substance, lacking of any kind of human emotions.

This is a little unfair if not entirely untrue, and I have to admit to have a weakness for any cinema that tries something different in its form, even if the narrative is a little neglected. 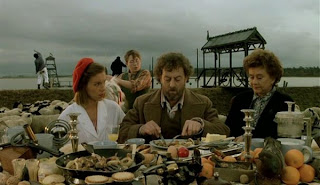 In here, as the film unravels, and the murderous women play a game of cat and mouse with the authorities who have become suspicious, it is as if all the characters turn into the pawns of a giant, ever changing boardgame. A traditional storyline is almost dropped completely as more characters join in and play this game with increasingly intricate and  ever changing rules, with echoes of Alice in Wonderland and especially its chessboard bound sequel, Through the looking glass.

Peter Greenaway's playful nature is at its best here, as he places numbers from 100 to 1 throughout the film, be it a number printed on a t-shirt, painted on a wall, or sometimes merely uttered by a character, and the audience is encouraged to take part in the game and find them.

While The Pillow Book holds a special place in my heart, Drowning By Numbers has risen at the top of his work as far as I am concerned, and it might also be his most accessible work (although with him, that is not saying much!) .

The British director's art might leave many cold, but here his evocative power is undeniable, as seldom have the wet and muddy British countryside and seaside been so evocatively represented. It is almost as if you can feel the chilly mist in the air and the smell of the fresh rain on the ground, in those typical English gardens that feature so prominently throughout. It is helped by the remarkable photography and a fantastic production design, with each shot as expertly designed as an organic, living and breathing painting. Yet again, Greenaway's usual accomplicate, Michael Nyman, creates a beautiful score, even more fitting than usual as its repetitive and heavily structured nature matches the mathematical theme of the film perfectly. And as an added bonus, there is a trio of wonderful actresses, Joan Plowright, Juliet Stevenson and Joely Richardson. 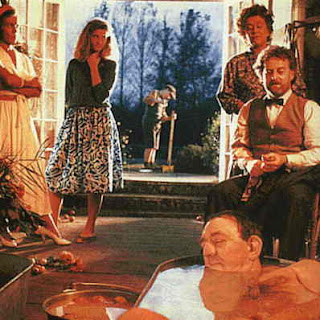 I have to finish on a slightly negative rant, but as big a fan of British cinema I was in the 80's and 90's, it is a shame that no new directors have since emerged with the same visual and experimental talent as Peter Greenaway, or somebody like Derek Jarman. Theirs was a cinema of class and estheticism. Even an emerging talent such as Lynne Ramsay, who started so promisingly, has hit rock bottom with the totally misguided We Need To Talk About Kevin. There was also John Maybury and his visual fest Love Is The Devil but again, his career has been declining since. And to think that the vastly overrated Danny Boyle is celebrated as the new herald of British cinema... As for Peter Greenaway himself, last I heard from him he was busy working on a rom-com. THAT I would like to see.

I could not find the trailer, which is not surprising the film is scandalously not available on DVD in Britain. But then again Peter Greenaway has always found himself more celebrated abroad and especially in France. I did find the opening scene which will give you a fairly good idea of the film's unique atmosphere.

Tomorrow at #14, we will be pensively staring through windows, smoking seductively, surrounded by floating drapes... And yet again, a recap of the film challenge Martyn Conterio at Cinemart and myself have embarked on, which you can find here.

Yesterday at #16, Martyn picked To Live And Die In L.A. a cult 80's classic which I cannot forgive myself for having missed so far, something I must remedy asap! You can read his post here.