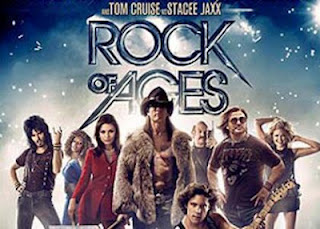 The recent Hairpsray remake was one of the best musical I have seen in years, with its fantastic cast, brilliant musical numbers and songs, and a fantastic last act that brought near shamanic level of infectious enthusiasm. So when news emerged that director Adam Shankman was embarking on a new project, the adaptation of an 80's tastic musical Rock of Ages (which I have never seen on stage), and then a fantastic trailer was released, my anticipation reached stratospheric levels. Yet Rock of Ages turned out to be intensely frustrating and catastrophically uneven. Where did it all go wrong?


In Rock of Ages, Sherrie (Julianne Hough) and Drew (Diego Boneta), two young lovers, pursue their dreams of fame and music in Los Angeles, working at infamous rock dive the Bourbon, while an aging rock star is attempting a solo career and conservative party-poopers are trying to shut the club down.

While in completely different settings, the structure and some of the characters of Rock of Ages are very similar to Hairspray so it is beggar belief that the director was able to commit such a misfire when he pulled it out so well with his previous musical effort. The main problem, which basically sinks the film, is the incredibly weak script, along with a surprisingly misguided direction.  The whole story feel very disjointed, with its large cast of characters all feeling like they are all in a different film and barely interacting together. The fact that the rise to fame story was told more efficiently in the recent Burlesque is saying something. 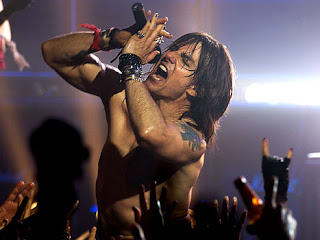 And the pacing is all wrong. What should be flowing naturally feels more like a collection of vignettes with some fillers in between. When we are treated to yet another shot of Julianne Hough tilting her head up slightly, with the wind in her Farrah Fawcett hair, breaking into a power ballad, which torpedoes any kind of pacing, you quickly realise that all hope is lost. I swear, a quarter of the two hours running time is made up of these scenes.

Adam Shankman managed to handle his ensemble cast perfectly well in Hairpsray, giving all of them, even in minor parts, a chance to shine. Yet in here, with a few exceptions, nobody is given enough material, bar the two rather bland leads. And even them are somehow short-changed, especially Julianne Hough, which somehow starts off the film as the main focus, as the wide-eyed Oklahoma girl coming to Los Angeles to find fame and fortune, ends up with being left on the side, with a character development that is frankly insulting to women, and I am not saying that just because she becomes a stripper in the second act. She is basically completely neglected as the story unwraps, merely becoming some kind of groupie on the side.

Supporting roles are left with very little to do. Catherine Zeta-Jones, playing the part of the older, female voice of conservative values, which Michelle Pfeiffer did with so much glee and spark in Hairspray, here has few scenes scenes, all feeling very samey, which completely squander her great potential, as make no mistake, the Welsh national treasure can act, sing, dance, be funny... as she has proven so many times before. Only her last couple of scenes are a delight, and I will not spoil it but her last shot in a fantastic outfit is pure joy!

Mary J. Blige, in the part of the wisecrack mentor which had Queen Latifah shine in Hairspray (so to speak), here seems to have somehow intruded the set hoping nobody would notice and put herself in front of the camera with basically no part to play.

Yet, frustratingly, the film DOES have at least a couple of brilliant scenes. A duet between Malin Akerman (otherwise wasted in the rest of the film) and Tom Cruise (more on him later) singing I want to know what love is briefly ignites the screen with some excitement cruelly lacking elsewhere. And Alec Baldwin and Russell Brand, whether they are singing I Love Rock'n'roll or bringing bromance to a whole new level, are absolutely hilarious, with a great comical timing and a sizzling chemistry. They elicited some of the biggest cheers in the audience. There is also an amusing dig at the birth of the manufactured boy bands of the early 90's (and heaven forbid the fashion of THAT time ever comes back, even ironically). 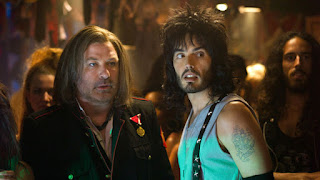 So Tom Cruise... The trailer made it look like his part as Stacey Jaxx was a one note joke, in the vein of his balding, rapping Hollywood producer in Hea. But far from it, with his character being by far the best thing about it. As Stacey Jaxx, he is an aging rocker purposefully kept in a fog of substance abuse (although the film is too wimpy to show this specifically) and girls by his swarmy manager (played by Paul Giamatti). His portrayal errs on the side of a stereotype (which makes sense as the character he plays is a bit of a stereotype himself) yet he never crosses the line of the pastiche, and is utterly believable, adding depth and almost poignancy to his part, while displaying a more than decent` singing voice we never knew he had!

I cannot deny that the brilliant 80's soundtrack, especially if you are watching the film in a massive screen with an ear shattering sound system, will appeal, if like myself, you are a massive 80's music fan. But they feel far less integrated to the story that they were in Hairspray (where arguably they had been written for the film specifically as opposed to being covers).

But too often, despite the exuberance and energy on display, and the director's undeniable visual talent, the whole experience feels like being invited to a party which you just cannot get into the vibe of, despite everybody seemingly having fun. It is just nowhere near as compelling and involving as Hairspray ever was.

Rock of Ages, could, SHOULD have been so much better. It would be interesting to compare it to the stage version, where I suspect script problems would not be such an issue. Would I recommend it in spite of everything? Despite seeing it in the best possible conditions, slightly tipsy after several beers, and with a drunken, indulgent audience ready for a good time, it still remained a distinctly average experience. Make that what you will. I would say Rock of Ages deserves its title, it's light as a rock and goes on for ages. What is even more frustrating, the 80's deserves a great musical with the music and fashion of the times, and how long is it going to take before anybody else attempts it now?