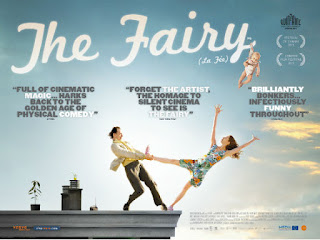 The Fairy is the third collaboration between director and acting trio Dominique Abel, Fiona Gordon and Bruno Romy following on from Iceberg (2005) and Rumba (2008) which also featured this films main characters Dom and the fairy Fiona. This is the story of how the couple first met while Dom (Abel) was working as a night watchman in a small Le Harve hotel and Fiona (Gordon) arrives one night barefoot and wearing a white t-shirt and soft pink tracksuit pants offering him three wishes. Two thirds of the wishes are asked for and granted with the third wish not having time to be considered as the couple’s love is thwarted by circumstances worthy of many a comedic silent film classic.

The Fairy is highly stylised, purposely using obvious back drops and breaking into dance routines worthy of a Gene Kelly Hollywood balletic musical if Kelly leant openly towards absurdist comedy. The film’s comedy is within the lineage of Charlie Chaplains’ Silent films with both Abel and Gordon giving physical performances that reflect Chaplain’s flair for performance not depending on sound or dialogue. During one particularly clever sequence, Dom helps Fiona to escape her mental institute home by wearing her as a coat with Fiona providing the wandering hands. Allied to the physicality of the comedy and dance performances by the two leads, the directors have infused the film with a Wes Anderson-like love of bright colours; bright yellows and blues feature prominently. The soundtrack is mostly filled with English language classics such as ‘What a difference a Day Makes’ sung by Dinah Washington making for a well orchestrated reason for Dom and the audience to believe in Fiona’s potentially real and not imagined fairy abilities. 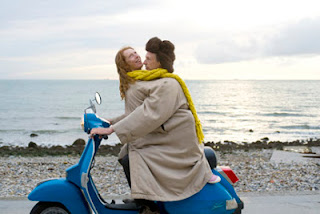 The film is populated with characters even more outlandish than Fiona all of whose stories intersect and criss-cross with that of the lead couple. There is an English tourist John (Philippe Martz) attempting to smuggle in his adorable dog Mimi into Dom’s hotel and three African emigrants living on the local beach along with the residence of Fiona’s hospital home. The neighbourhood café called L’Amour Flou is run by a medically blind man played by co-director and co-writer Bruno Romy barely feeling his way around his establishment. For no other reason bar delightful absurdist comedy the café is patronised by the local women’s rugby team fresh from the field that includes a jazz singing prop forward whose team provides her with her own personal wind machine effects. There are enjoyable multiple chases and even the old Silent film reliable use of a baby in peril making The Fairy homage to the Silent era but in full sound and Technicolor. If you have Wes Anderson film leanings then The Fairy is for you. It is a gem of a film, kind, funny and endearing and as the film makers have steered clear of the idea of this being part of a trilogy, hopefully The Fairy is a part of their ever building canon of films.

The Fairy. France 2010 Directed by AND starring Dominique Abel, Fiona Gordon, Bruno Remy... (Yes, all 3 directors have a leading role in the film too). Out in the UK on the 25th of June
at 22:58