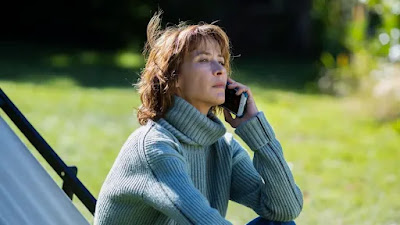 The prolific and one enfant terrible of French cinema François Ozon has had an uneven career to say the least, to be expected perhaps with that kind of output. Yet at times it is hard not to feel that he has not completely fulfilled the promises of his early career and you never quite know what to expect which each new film.

In Everything Went Fine, Emmanuèle (Sophie Marceau) has to look after her father André (André Dussollier) after he suffers a stroke that left him near paralysed and in poor shape. As he asks her for the impossible, to help him end his life, she has to confront her conflicting feelings about him and her family in the midst of her busy life.

Every time a film tackles an important issue, here assisted dying, there is also the danger that a director will hide behind its subject and completely hides behind its subject. Thankfully, it is obvious early on that nothing on the sort is going to happen with Everything Went Fine.

Its main strength is that all the characters feel real (somehow understandably since the film is based on a true story!), human and flawed as a result. Even more impressive is how François Ozon manages to capture the real-life dimension of such sad events, in the sense that for all the gravity of what is going on, life goes on, Emmanuèle bickers with her sister Pascale (Géraldine Pailhas, impressive), the small details and annoyances of life come in the way... For all the sadness of it all, one cannot feel grief every waking minute. The tone is never too solemn and there are splashes of gallows humour too.

One narrative development makes you feel the worse as the more determine André is to end his life, the more he actually recovers and find a new appetite for life, just as elements from his double life emerge and collide with the already fraught members of his family although, without spoilers, the film does not descend into a kind of life-affirming lecture you fear might derail it.

Sophie Marceau delivers a towering performance in this, not one that is rooted in excess and melodrama, rather portraying a character that is messy, conflicted and flawed, just like life and ultimately, terribly moving.

Ultimately, Everything Went Fine does not offer a lecture indeed, the director does not judge or offers arguments to both sides of the debates, he is more interested in the human beings at the heart of this story and how such a seismic event can affect them, especially when they have to make some decisions that might go against their moral judgements and even break the law. His latest film is one of his very best.