Cannes 2021 - Where Is Anne Frank by Ari Folman 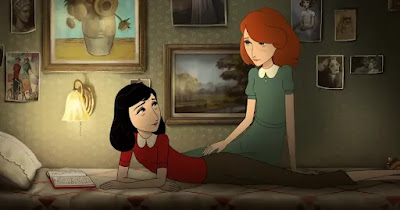 Israeli director Ari Folman made a big impact on the Croisette with his animated documentary Waltz With Bashir in 2008, which many predicted a palme d'or win yet it left empty-handed. Its follow-up, The Congress (2013) was a flawed but fascinating part live action, part animated sci-fi folly and now he is back in Cannes, out of completion, with Where Is Anne Frank.

In it, part retelling of the story of Anne Frank and her diary, part contemporary tale linked to it, a young girl named Kitty speaks to the spirit of Anne Frank as sort of imaginary friend after, through a chain of events, finding herself in possession of said diary, triggering a frantic search in Amsterdam by the authorities while she herself becomes aware of the plight of refugees.

Right from the start, it appears that Ari Folman's inspiration has deserted him. Perhaps stifled by the weight of such an important story, the visual style is barely above what you would expect from a cartoon on morning TV. Apart from a few striking visions later has that picture nazi troops as some kind of caped demons, it all looks rather perfunctory. Worse, the voice acting is bland and flat, at times didactic, other times grating (Kitty is a particularly annoying character). Kudos for engaging children with such an important part of history but it all feels rather patronising and needlessly simplified, making one wonder what age is being targeted here. A soundtrack of Karen O, as beautiful as it might if listened to on its own, feels like an odd artistic decision and is jarring throughout.

Yet the lack of spark and talent is not the film's worse crime. By trying to tie up the past and present and reflecting on an ongoing oppression and lack of solidarity, Ari Folman commits the unforgivable crime of implying an equivalence from that era with the current refugee crisis. As noble as his intention might have been, a truly despicable penultimate is of such jaw-dropping bad taste it has to be seen to be believed and is the final nail on the coffin of this totally misguided project.

Official Selection, out of competition

Where Is Anne Frank. Directed by Ari Folman. With the voices of Ruby Stokes, Emily Carey...