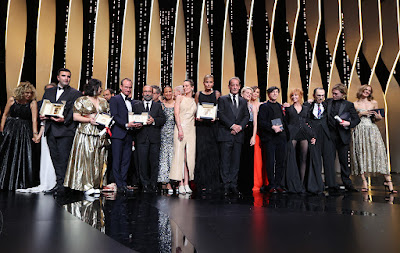 No matter what was going to happen with the awards, the 2021 edition of the Cannes Film Festival, as unusual as it was, was a resounding success, a celebration of cinema that was much needed and considering some of the most outlandish predictions by some nay-sayers, the proof that it is still possible to hold a film festival of that scale in these covid days. Yet some great editions have sometimes left us with a sour taste when the awards did not quite match what had come behind... We should not have worried!An unusual year gave us an unusual awards ceremony. President of the jury Spike Lee appeared confused when Tahar Rahim asked him to give the name of the first film and ushered the words "The Palme d'or goes to Titane" to the shock of consternation of the rest of jury and the bafflement of us all, had he really given the name of the top winning film right away. Yes he had, except that what could have been an embarrassing moment turned out to be a touch of chaos that fitted this year well. This year the jury chose youth with a touch of chaos indeed.

Titane marks the second time a woman wins the top prize (and the first one, Jane Campion, had to share the Palme with Farewell to my Concubine) and what an exciting win, rewarding the second film only of a burgeoning talent who more than confirmed all the hopes that had been placed upon her. That such an unusual film won the top prize gets to show how small jury in film festivals can reward some much more unexpected films than a full voting body could ever manage.

The jury was tuned to social issues but it did not forget about cinema, indeed perhaps nearly as a big a surprise as the Titane win was Compartment No. 6, the delightful and bittersweet Finnish film about travel and an unlikely friendship winning a shared Grand Prize (the runner-up prize).

As for Renate Reinsve, I hoped but did not expect her win for again, a film that some might find slight and certainly not an issue film, yet her award is richly deserved.

Elsewhere, some challenging films seem to have divided the jury (Memoria having to contend with a Jury Prize for example) and it was nice to see the divisive Annette rewarded with a Directing Award, especially considering how Leos Carax left empty-handed with his previous film Holy Motors despite many predicting the Palme back then.