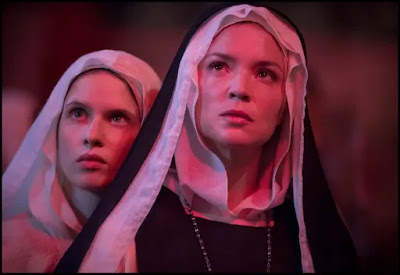 Benedetta was arguably one of the most anticipated film on the Croisette this year. The idea of Paul Verhoeven tackling the subgenre of nunsploitation soon after his most successful critical and commercial hit in a while, Elle, was exciting enough and after its delayed production and release, first due to the director's health issues then the small matter of the pandemic, it was finally shown on competition.

In Benedetta, a novice 17th century nun, Benedetta (Virginie Efira) puts her convent in turmoil when she is struck by some religious visions then exhibits the signs of stigmata while turning her romantic attention to a younger sister, Bartolomea (Daphné Patakia).

The trailer released a few weeks ago might have shown a vision of the Middle Ages that was a bit too clean and worse, with a touch of "quality" French period drama to it, especially compared to the director's own Flesh and Blood but these concerns are quickly assuaged as we are exposed to bodily fluids and bodily functions with a certain gay abandon from the beginning. However the costumes and even sets are all pristine, the nuns wear make-up and have some decidedly non period appropriate bodies with a trimmed, ahem, nether region. This contrast works beautifully, evoking some of the less salubrious predecessors in this subgenre and avoiding a certain historical dourness.

It would not be a Paul Verhoeven film without provocations and there are some, obviously in the main plot and its sapphic romance (which is based on the book "Immodest Acts: The Life of a Lesbian Nun in Renaissance Italy" that itself refers to true events) as well as a scene with the ingenious use of an improvised toy but the feverish inventiveness of the religious transgression found in The Fourth Man is lacking. Indeed the absence of actual graphic shots might surprise some. Yet it all makes sense as is quickly become apparent that this is not what Benedetta is about.

The Dutch director is not so much interested in an easy, one-note denunciation of the Catholic chuch, even though many facets of its hypocrisy are laid bare. Rather, he portrays it as a tool of ambition and survival for women at the time and explores its power dynamics. It is made abundantly clear they were worth nothing back then and could be bought, abused and traded for animals even. The convent here is presented as a viper's nest of intrigues, backstabbing but also opportunities for those within its walls in a way that would have been impossible outside nobility.

Yet Paul Verhoeven's film does not have a simplistic cynicism, there is some ambiguity  in the conflicting motives of its characters and above all Benedetta herself. As such, Virginie Efira's performance is spot on and the perfect mirror of that complexity. First seen as a deeply pious child then nun, she resists the temptation to overact, even when "possessed" and in the thralls of religious fervour. Is her rise within the ranks of the convent due to an act of God or her scheming? The actress cultivates a satisfying mystery around it behind a wholesome appearance.

As for Charlotte Rampling, first expected to just be a bit of a stern comic relief with her barbed comments and world-weariness, she is outstanding with a character whose narrative arc takes some unexpected turns and given more depth than anticipated.

While the film respects its characters and is serious when it needs to be, rest assured that the director of Starship Troopers and Showgirls has not lost his bite and he conjures up a few hilariously kitsch religious scenes (some that include a pretty chilled Jesus Christ) whenever the film runs the risk of being too solemn.

Benedetta might not be top tier Verhoeven and not quite what the titillating poster and premise sold it as but is an interesting film in unexpected ways.