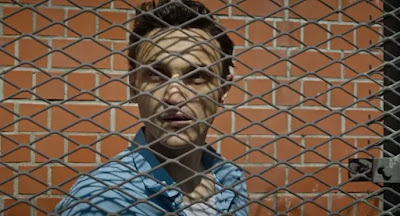 Great Freedom, a decades spanning German gay drama set during those times when the love that dare not speak its name was not allowed, follows Hans (Franz Rogowski, outstanding) over the years as over the course of several stays in jail, starting off right from the mid '40s to the '60s, guilty of the same crime over and over again: homosexuality. The best idea of Great Freedom is to almost exclusively confine itself to the same location, the prison where all the characters spend some time in and out, nearly completely obscuring all the years they have outside, as if to indicate that their lives is reduced to this single location due to the threat and persecution they suffer from and anything else outside is not allowed to exist. Indeed we are given no details about their lives outside prison.

It is indeed a real eye opener for most that such a seemingly tolerant German society that emerged from World War Two eschewing any kind of authoritarianism could still keep such a cruel and discriminatory law, Paragraph 175 that criminalised homosexual activities.

However director Sebastian Meise refuses to treat his ensemble of characters as one note victim, for all the injustice they suffer, rather this is more of a character study on how each of them react and deal with it all, with solidarity but survival in mind too as well as friendships and romantic involvements, with a shifting power dynamic between them. As Hans Franz Rogowski is a revelation, all in apparent toughness but also vulnerability with a layered performance that evokes so much often with mere body language.

Great Freedom is filmed with great restraint but also an inspired visual style that portrays at once the claustrophobia of its setting but also the fleeting warmth that finds a way in these men's lives.

Great Freedom is an issue film but one that does not forget about cinema and the director treats its characters as human beings with their flaws and human side, this is no dour, simplistic lecture. The final scene, chilling but not unexpected, leaves us with a great sadness with the realisation of how broken these men's lives are and the waste of it all.