Cannes 2021- Compartment No. 6 by Juho Kuosmanen 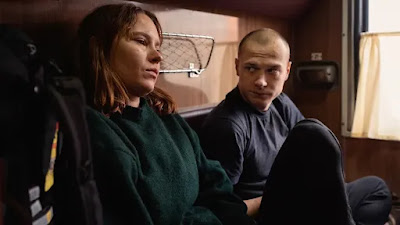 Finnish director Juho Kuosmanen made a big impact in Cannes in 2016 with his charming The Happiest Day in the Life of Olli Mäki, winning the Un Certain Regard top prize back then. He is back in the official selection and in competition with the adaptation of the novel of the same name by Rosa Liksom.

In Compartment No. 6, a Finnish student, Laura (Seida Haarla) who lives in Moscow in the '90s is in a seemingly happy relationship with the older Irina (Dirana Drukavora), a teacher, when she decides to board the Trans-Siberian set to Murmansk to see the renowned petroglyphs. On board she shares a compartment with Vadim (Yuriy Borisov), a young, coarse Russian man.

Is it not interesting how so few films manage to capture the joy of solo travelling with realism? Often those films are about the transformative nature of it all in a glossy Hollywood way (Eat, Pray, Love) or are based on historical true stories (The Motorcycle Diaries). Few however manage to portray its somehow mundane aspect of long travelling hours and a certain loneliness but also the fleeting relationships you experience along the way, ones that often do not lead to anything long term but are all the more precious.

Yet Compartment No. 6 is such a film, seemingly slight yet wonderful, so full of subtleties and nuances. The director has a real talent managing to make the action largely set in a train compelling, keeping it all realistic and not too pretty either with just that touch of claustrophobia with a few escapes at their various stops along the way. While the subject so closely evokes Before Sunrise (even though the Richard Linklater film only had a brief section set on a train), here it is friendship more than romance that is on the cards.

Laura and Vadim do not start off on the best terms with the boorish Russian man being close to abusive towards his travelling companion, to the point that she tries to change compartments to no avail. Yet over the course of the story, as a mutual curiosity sets and they get to learn each other a bit better, a connection builds slowly but surely. Vadim is quite simply unable to communicate his emotions verbally and once his facade slips emerges a surprisingly sensitive and even attentive man. Talking about facade, we soon realise that the happy relationship Laura is in is nothing of the sorts and there is more to this trip than originally thought.

As mutual respect grows and their connection building up, the film offers the snapshot of two gentle souls that briefly connect, eschewing sentimentalism and any mawkishness and instead settles for a discreet and gentle gentleness, all the way to a subtle but mightily affecting final scene in which the audience feels it has learned so much about this unlikely pair despite so little being said.

An assured yet effortless gem, Compartment No. 6 might not has the kind of heavy topics that wins prizes but it is so far one of the best films of the competition.