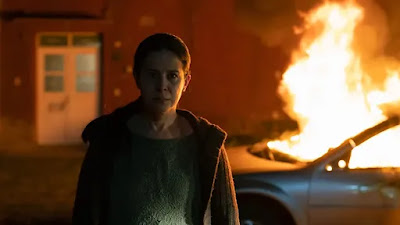 The premise of La Civil is familiar, perhaps overtly familiar: when her teenage daughter is kidnapped by a drug cartel in Northern Mexico, Cielo (Arciela Ramirez) decides to take matter into her own hands as the authorities are unable or willing to help, soon turning into a vigilante as violence around her escalates. At the very least we are spared the usual yellow tinge that American films feel obliged to add when filming a similar story. Indeed first time director Teodora Ana Mihai impresses right from the start with a visual style that works wonders with shades of black and a very particular way of filming night scenes.

She is also very skilfully add a sense of anger and danger to her every shot that makes the fairly long running time fly by, all the more impressive as she uses bursts of explosive actions sparingly, focusing more on some intimate and tense interactions where no one can be trusted.

While the story follows the expected beats at first, with an indifferent police, a local population too scared to talk and gangs on brainless teenagers swallowed by this world due to a lack of alternatives, La Civil makes a marked turn from what you expect. Cielo is forced to abandon some of her principles and even lawfulness to achieve her means and find her daughters (so far so Death Wish), she soon realises alongside the audience that nothing is as simple, teaming up with a fierce lieutenant with questionable methods and not afraid to use violence and break rules to get his way. In a chilling scene we see him interrogate a female accomplice with connections to the kidnappers in such a brutal way that we are left with our mora compass spinning.

The war of drugs is here portrayed as a faceless plage in a bleak but unsentimental and realistic manner with the different ways individuals are pulled in the various shades of moral decisions they have to make and some of the individuals connected to the kidnapping turn out to be closer to home than she ever expected.

As Cielo, Arciela Ramirez gives a compelling performance all in nuances, vulnerable, determined but capable of actions she never expected herself capable of. La Civil is a striking directing debut for Teodora Ana Mihai,