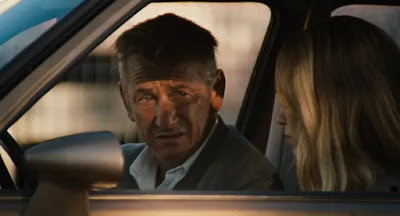 Sean Penn's previous film, The Last Guard, earned a place in the history of the Cannes for all the wrong reasons, receiving some of the worse reviews in the history of the festival after a memorable press screening filled with uncharitable laughters and gasps. While snark and outlandish reactions might have come across as unprofessional, it truly is a ghastly film, vain, hollow and one that probably did not belong to the competition. Surely you would expect the director to ask for some honest feedback before having his new film screen in competition, surely he would not have as bad a film? Surely...?The best thing you can say about Flag Day is that it is not as terrible The Last Guard. This is not saying much and it is also the only nice thing you can say about it, a self-indulgent and misguided effort that reeks of narcissism and makes one wonder where all the directing talent Sean Penn showed in his first, brilliant films such as The Indian Runner, The Pledge and even more recent ones such as Into The Wild.

Flag Day is based on a true story and the book Flim-Flam Man by Jennifer Vogel in which she evokes the memories of her father John (played by Sean Penn), a criminal imbued with a certain magnetism and for whom she kept a certain attachment despite the lies, broken promises and lack and support. It is easy to see what attracted the American actor/director to this story and with him casting his own daughter Dylan Penn as Jennifer, one has to wonder how many connections he found in the story, not so much the criminal side of things obviously but more in the broken ties and loving relationship between father and daughter despite the bumps on the road.

Flag Day could almost has worked as a slice of pure Americana and a story of a strong if flawed family bond. At times you can catch a glimpse of Sean Penn's qualities as a director, evoking the passing years in the deep of the country with a certain visual flair and an affecting voice-over by Dylan Penn. That is is melodramatic does not even work against its other directors have earnestly embraced melodrama in the past with much success. Yet it fails because it still feels far too self-indulgent and it tries too hard. For a film that aims to be on the side of the he "real" people it was an odd casting decision to have so many of the director's Hollywood chums in cameos that prove very distracting.

While Dylan Penn sure is a talent to watch, whatever you might thing about nepotism, Sean Penn embarrasses himself with a performance with zero nuances however.

Perhaps Sean Penn will make a great film again some day if he does not surround himself by yes-men and shakes off his self-indulgence as an artist.